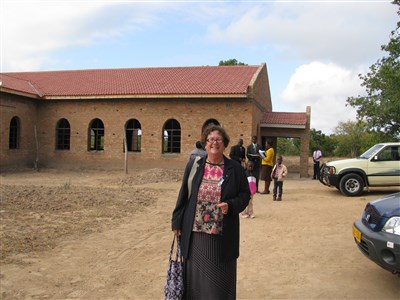 Saundra McKee, a life-long United Methodist and active member of Manorville UMC, spent five weeks last summer as part of the Zimbabwe Immersion Program. Committed to spreading the Gospel of Jesus Christ, she was an educator for 38 years at the secondary and college levels before retiring in 2008. Her PhD is in International Multicultural Studies. She offers the following commentary on her experience getting to know the people and churches of the Marange District of Zimbabwe.

--A commentary by Saundra McKee--

I was honored to participate in a five-week Zimbabwe immersion in Indiana District’s partner district of Marange in the summer of 2016.  I went to learn about the culture and church there.  The biggest question in my mind was, “Why is the church growing so dramatically in sub-Saharan Africa and so slowly, if at all, in the United States?”  The question is a broad one, and as a lay minister I am not qualified to address the whole of Africa, especially countries where Christians face horrendous persecution.  My immersion was spent in one of the poorest, rural and most drought-stricken of the districts.

I lived with the Beauty and Higherman Mukwekwezeke family. Beauty was very active in her church at the local and district levels.  I spent most of my days in the company of pastors, visiting with churches, congregations and Methodist-supported schools.  I’ve traveled the world, but worked as an educator and lack seminary training.  Thus my conclusions are personal and based on my observations and conversations with the wonderful people I met in Zimbabwe.  As a liberal, I didn’t always agree with everything I experienced, but I’ll attempt to share my thoughts as objectively as possible.

The laity I interacted with clearly put God at the center of their lives.  Most have very little in material things, but have strong faith that their prayers for a more stable government and economy will be answered. Some estimate that one third of the people have left the country.  One man said, “People have little hope in the economy or the government.  Our only hope is Jesus Christ.”

While a higher birthrate accounts for some of the church growth, and a lot of the growth is with the evangelical Pentecostal denominations, the United Methodist Church is also growing.

Church is not just an hour on Sunday morning for Methodists.  Most people lack cars, but walk as much as 10 kilometers to worship. Although they often have to wash their clothing in a river or bucket, they dress up in their best clothing, looking clean and fresh for worship.  Services may last two or three hours and no one seems to mind.  Young people are involved in the service from their earliest years and have many activities (revivals, quiz bowls) just for them.

Churches also use John Wesley’s idea of class meetings, which are referred to as “sections” in Zimbabwe.  During the week you meet at the church or a home with a small group for prayer, singing and devotion.  Some pastors hold their congregations very accountable for attendance.  United Methodist Women also meet weekly and along with devotions and prayer, often enjoy a fun activity like aerobics.  Women who are full members take pride in wearing blue and red dresses and men wear blue banners that tell the world they belong to Jesus Christ. In the home where I stayed we also usually had evening devotions before retiring for the day.

Zimbabwe has the one of the highest literacy rates (90%) on the continent and people often speak and read both Shona and English. They have their own hymnals and often have copies of the Bible on their cell phones.  People find humor in their difficult circumstances. With Zimbabwe’s unemployment rate estimated to be near 90 percent, Beauty recently sent me a text asking: “What do relationships and Zimbabweans have in common?”  “Most of them don’t work. Kkkkk”

Their interpretation of the Bible is much more literal than those found in most U.S. United Methodist churches.  Women are expected to be submissive and subservient to their husbands. For some, primitive ideas remain despite membership in the church.  Some believe that a baby born with birth defects is somehow tied to witchcraft or the sins of the parents.

The people are friendly and generous by nature and gave hugs and gifts to me when I visited their churches and their homes.  They are also painfully aware of how little their pastors receive in salary and benefits and often make a big celebration of their birthdays, bringing gifts of crops, foods and other valued items.

While most worshippers would likely enjoy a beautiful building to worship in, this was seldom the case.  Some worshipped on benches under the trees, in buildings without roofs and windows, and in all manner of places.  Some worship took place in school classrooms, while others enjoyed completed church structures, some lovely and some humble. The place they worshipped in did not seem to occupy as much of their concern as the manner in which they worshipped.  They worked away at raising funds and making improvements as they became available.

Laity holds similar offices as we do in the United States, but unlike many of us who dread being asked to assume these responsibilities, Zimbabweans take great pride and pleasure in them.  I recently complained about some job I was given at my church in a text message and one of my friends from Marange chided me, “You must do what God calls you to do.”  Laity are often introduced at each service and meetings and shown great respect and appreciation for their contributions.

Methodist schools are plentiful and well-respected and, along with secular subjects, give students a good background in the word of God.  Even non-church-related schools make use of Biblical stories and prayer to teach important concepts.

In conversation, most people, even away from the church, often make reference to our heavenly Father.  Every night as I went to bed, I was wished “Angels under your pillow”. And answers to questions often contained spiritual references.  When I remarked to someone how hard the people labored, the reply was, “God gives us nuts, but He doesn’t shell them for us.”

Pastors in Zimbabwe are similar to our own in terms of their education.  There are surprisingly large numbers of women in the ranks and also several couples who serve different circuits (charges).  Most do not own cars and live in parsonages that often do not have electricity or running water. One pastor told me that out of 600 members in his charge, only two had cars.  I never heard any complaints, despite the fact that their salary range was $150 to $500 a month. Yet the prices are surprising similar to those in the U.S. A new tire for a car runs around $100 and a six-pack of toilet paper is $3.99.  There is little manufacturing and much has to be imported (when permitted by the government). Pastors are expected to visit each congregation member at their home once a year.  Most have congregations of between 500-600 people in charges or circuits of four to six churches.  One woman said, “Our pastor knows all our names and all our dog’s names too.”

The sermons I witnessed were some of the most dynamic I’d ever heard or witnessed.  Pastors seldom stand still.  They use their voice, body, song and drama to keep the attention of the congregation. All of the clergy that I met in Marange were humble, articulate and very caring individuals with great humor.  Members of the congregation regularly share crops and other foods to supplement pastors’ meager salaries.  In turn, some pastors also share the bounty of their gardens with congregation members. One pastor was known for baking delicious cakes for members and visitors like myself.

The district superintendent is not just familiar with all the pastors, but also with great numbers of the congregation.  One day when we’d spent an entire Sunday at worship and were heading home, he heard that a church member from another charge had had her small grocery store burglarized.  He immediately suggested that we go and offer comfort to her, even though it was well past 5 p.m. He regularly hosted gatherings for congregations and district members in his home despite the fact that their well had been dry the entire season.

Music is crucial to setting the tone for lively worship services.  Only one of the many churches I attended had a keyboard.  The others used drums and shakers (dried gourds with seeds or wooden instruments with soda caps).  The Lay Leader often opens the service with lively songs and the people are soon singing and dancing displaying a passionate love for Jesus Christ.

I attended several Harvest Thanksgiving Sundays where people brought gifts for the church.  While many lacked cash, they would bring bags of crops, chickens, sheep, goats and other offerings that would be auctioned off to help the church treasury.

The themes of sermons were similar to what one would find here in the states.  Congregations were always urged to seek excellence in all aspects of their faith and to continue to grow in their knowledge and love of Jesus Christ.

Revivals were much more common in Zimbabwe than in western Pennsylvania.  They were often designated for youth or adults and could last for several days.  Several people told me that they felt the revivals were one of the most effective means for bringing new people into the church.  At one large camp meeting in August, over 10,000 people attended.  Each of the churches contributes monies and efforts to make these gatherings possible.

At every event I attended I saw greater support and empathy for the clergy than I’ve witnessed in the United States.  Pastors are revered and their work is seldom questioned or criticized.  In the same manner, laity is also greatly revered and appreciated and made to feel critical to the growth of the church.  There appears to be tremendous team building and team effort between clergy and laity in making disciples for Jesus Christ.

A quick read of current news sources will reveal that Zimbabwe is in crisis and faces a very uncertain future.  Lack of rain, food, money, jobs and basic necessities make it one of the poorest, most desperate nations on earth.  I returned to the United States much stronger in my own faith and much more determined to reach out to the poor and needy in this world.  Whenever I would ask anyone in Zimbabwe what we in the United States could do to help, the answer was always similar, “Please pray for us.  We know that God hears our prayers, and in His time will ease our woes.”

I was always surprised when a family would invite me to bless their new baby or home.  As a lay minister, this had never happened to me in the U.S.  Beauty explained that some people in Zimbabwe feel that white people are closer to God.  The statement made me very sad, but not surprised considering the world’s history of colonialism and racism.

In Radical: Taking Your Faith Back From the American Dream, David Platt encourages a “radical abandonment” of the materialism and business, prosperity and safety first mindset of our own culture in favor of a more Christ-like Gospel-centered existence. God allowed me to witness very authentic discipleship during my time in Zimbabwe.  While I pray for the return of prosperity to this nation, I hope that the people’s transforming daily devotion to believing and obeying what Jesus actually told us to do remain steadfast in Zimbabwe.