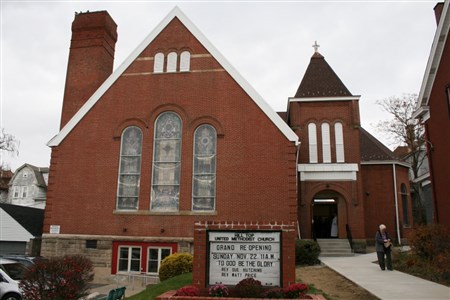 It took up to four people reading different chapters simultaneously in the last days, but members and supporters of Hill Top United Methodist Church managed to read through the entire Bible in the week leading up to the Sunday service celebrating the reopening of their worship space, which was severely damaged by a fire more than a year before.

The Bible-reading marathon began with the congregation reading Genesis 1 together as the last act of worship together on a late November Sunday morning and ended when the congregation began the celebration worship by reading the last chapter of Scripture, Revelation 22, together. Jessica and Naomi Price, shown at left, led the reading. In between, it took about 76 hours of reading the Bible out loud and in shifts for members and friends of the church to make it through the entire Bible. 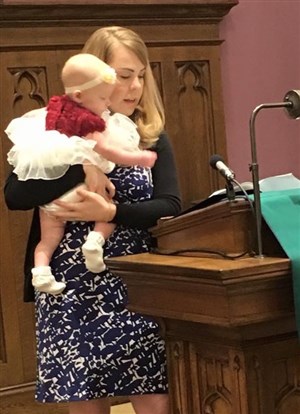 "It was amazing," said the Rev. Sue Hutchins, senior pastor of Hill Top and five other congregations in the South Hills Partnership of UM Churches. "We had 16 people scheduled to read every day and evening--and over 70 people participated, members, colleagues, and others from the community.

Rev. Matthew Price, the associate pastor who proposed the idea, divided up the whole Bible into 150 thirty-minute reading shifts.

"The responses I've received from the readers have been very positive," he said. "One lady who read sent me an email saying that 'even though I may have butchered the biblical names, it felt really good to read the Bible out loud.'

"At one point on Saturday, we got a bit behind in our reading," Price said.  "Our solution was to have readers positioned all around the sanctuary, each reading different parts of the Bible out loud to help us catch up. Even if they weren't reading the same things, there was unity in that place as their voices rang out, giving glory to God. I believe this Bible reading was a powerful community event for the Hill Top Church and our whole South Hills Partnership, and a unique way of blessing the new sanctuary by filling it with the entirety of the inspired Word of God."

Hutchins was one of the readers.  She said she learned some things, especially after reading through Leviticus. "Not all chapters and verses are equal," she said. "Some take a lot longer to get through.

She also was one of those who read aloud with others on Saturday.  "I'm usually easily distracted," she said. "But somehow I became really focused on what I was reading and didn't notice people moving in and out around me. It was a great experience!  All were praying and praising God through their reading!"

While church leaders were worried about whether the renovated old building, which had to be brought up to current building codes, would pass the needed inspections before reopening, Hutchins quoted Price's wife Jessica as saying they were comforted in knowing that "we were reading the word of God and that the word of God stands forever.  God was being glorified."

The church was well-insured, but after the fire, sparked by a roofer's torch on August 28, 2014, Hutchins said a few suggested that abandoning the building might be more economical. Some other churches in the area had closed in recent years. But Hutchins said Hill Top plays a vital role in the community and received considerable support, mostly in the form of small donations, from other area church groups and individuals outside the congregation.

A young boy from a partner church raised $800 by growing and auctioning pumpkins; a Sunday School class at a nearby Baptist church collected $250 because they wanted to be "doers of the Word". Someone who grew up in the church made and sold bracelets.  Individuals gave what they could--sometimes $10 or $20.

"All of the support and small gifts -- that's why we want to stay in the community," Hutchins said. The spirit behind the support, she said, helped them get through during the $1.5 million renovation project. 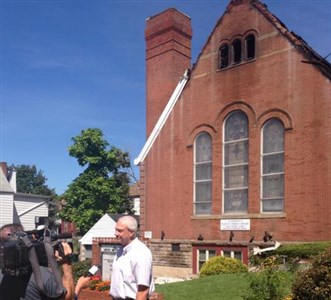 The church building was dedicated in 1891 as John Wesley Methodist Episcopal Church. When it was damaged by the fire, in addition to providing worship space for the United Methodist congregation and the six-year-old Redeemer on the Mount congregation, it housed a Senior Center that provides lunch and activities for about 40 area residents daily.  The church also hosts many community meetings and gatherings. During reconstruction, its ministries continued.

In late October, The Brashear Association, a nearly 100-year-old community development and empowerment organization,  honored the Hill Top congregation with its Community Service Award “in recognition of outstanding service to the families of South Pittsburgh.”

Pews and several items that were removed from the church by firefighters, including the communion table, a large cross, and a lectern, were moved back into the church the first week of November.

After the three-alarm fire burned through the roof of the church, Hutchins told the news media, “It’s pretty devastating, but God is bigger than any fire.”

The day after the fire, when Pittsburgh District Superintendent Paul Taylor and Bishop Thomas J. Bickerton came to pray with the congregation, she noted, “With God, we've got this!”

See photos from the re-opening celebration and the Bible-reading marathon at flickr.com/photos/wpaumc