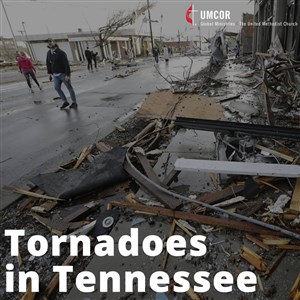 Soon after tornadoes and hailstorms devastated several communities in Nashville and other parts of Middle Tennessee during the early morning hours of March 3, United Methodists were praying and working together to help those affected.

"I am thankful that through our United Methodist Connection, before daylight, our people were connecting and mobilizing to respond to the disaster," said Bishop Bill McAlilly of the Tennessee Conference. "As we continue to assess damages to churches, homes and businesses, our hearts and minds are with the families of those whose lives have been lost." At least three churches and a parsonage were severely damaged and staff members of some UMC agencies headquartered in Nashville were personally affected.

Craig expressed gratitude for the care and concern after the tornadoes and hailstorms, but he noted that the damaged areas were still operating under an emergency. Neither the Conference, nor the affected communities, are ready to receive volunteers.

You can support those affected through prayer and financially contributing to UMCOR's United States Disaster Response and Recovery through Advance #901670
After a formal request for assistance, Early Response Teams (ERTs) may be deployed. ERTs are specialized volunteer teams, whose members are UMCOR-trained, have clearances and are badged.