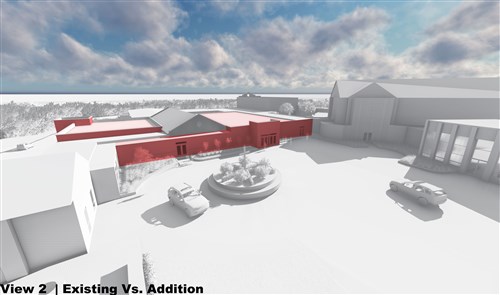 A ground-breaking ceremony Sunday, May 1 at Christ United Methodist Church in Bethel Park celebrated the Giving Hope missions and building project, which will benefit local and global missions, as well as update the church campus.

The $500,000 mission portion of Giving Hope will substantially impact several local ministries and rebuild a health clinic in rural Zimbabwe, affecting the lives of thousands of people otherwise without health care.

The construction at Christ Church includes renovation of and additions to the existing building. It will include additional space for children, youth, Prime Time adult day care, and a grand Community Square - or “hub” - enabling all to gather in a central area.

Christ UMC has a long history of partnering with the United Methodist Mission at Nyadire, Zimbabwe. It started when the church worked through UMCOR to support renovations to the hospital at  Nyadire.

Relationships grew and, after a 2006 mission trip by 18 Pittsburgh area United Methodists, The Nyadire Connection (TNC), a faith-based nonprofit, was formed. TNC's purpose was to build long-term relationships between United Methodists in Western Pennsylvania and in Zimbabwe. In the past few years, in response to needs identified by mission personnel, TNC has helped to bring quality health care to two remote areas by supporting renovations of rural clinics. The Chikwizo Clinic was the first to open, and work at Nyahuku Clinic is operational, with work nearing completion. Read UM News Service story by Evaline Chikwanah.

"Christ United Methodist Church in Bethel Park, Pa and Dendera UMC Rural Health Clinic in Zimbabwe will watch their futures unfold together over the next year," said Drew Harvey, leader of TNC.  "Dendera is 'at the ready' with bricks for their new clinic. Dendera will be the third of the six clinics administered by Nyadire Hospital to be rebuilt.  Dendera construction funds are a portion of the mission share of funds raised for CUMC’s expansion."

Construction at Christ UMC will begin sometime in the early summer of 2016 and should be completed by fall of 2017.
Learn more and see photos at cumcgivinghope.net.