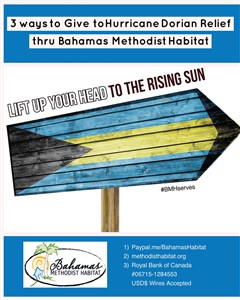 Rev. Stephanie Gottschalk, former Mission/Volunteers in Mission coordinator for the Western PA Conference currently serving as executive director of the Bahamas Methodist Habitat, is coordinating plans for long-term disaster response and recovery for Methodists in the Bahamas after Hurricane Dorian caused widespread devastation there.


Headquartered at Camp Symonette on Eleuthera Island, Bahamas Methodist Habitat regularly hosts volunteer mission teams to repair homes. It also serves as the disaster outreach ministry of the Bahamas Conference of the Methodist Church, mobilizing resources and volunteers for such things as debris removal and emergency home repair. Camp Symonette also serves as a hurricane shelter for the people of Central Eleuthera.

Eleuthera is about 80 miles south of the hardest hit islands--the Abacos and Grand Bahama--and escaped the devastation seen there. “We have some debris on the roads, but we’re good,”Gottschalk said. Those on her island were having difficulty with electricity and in making contact with loved ones, but were safe.

Earlier, in a telephone interview with Pittsburgh’s WTAE-TV, she noted the extensive damage on Grand Bahama, where "everything is flattened...trees were gone and and buildings were gone. I think the hardest thing is to make sense of that....that we could be so close and yet have such a different impact from the same storm, she said.

Gottschalk's primary task in the position she was appointed to in January 2018  "is preparing volunteer and recovery response for the Methodists with a view toward the long term,” she explained. As Volunteers in Mission coordinator in Western PA for five years, she played a similar role, training and recruiting volunteers on a regular basis and mobilizing teams to address long-term recovery from flooding in the region. She had been involved in global and local Volunteers in Mission work since she was a teenager in Waynesburg, PA.

Rev. Gottschalk has been in contact with UMCOR, which on Tuesday announced it had awarded a solidarity grant to Bahamas Methodist Habitat. "This grant provides immediate, emergency short term funding to address the basic human needs of those affected by this catastrophic storm," UMCOR's announcement said.

In a Bahamas Habitat Facebook post Tuesday evening, Gottschalk said: "Thank you to everyone for your love and concern.  Weather and sea conditions continue to complicate the search and rescue process. US Coast Guard is assisting the Bahamas. BMH is on standby to respond to assist survivors in two different ways when the needs of the constantly changing situation become clear."

You can help by continuing to pray for those affected by Hurricane Dorian and by making a donation to the response efforts.
News