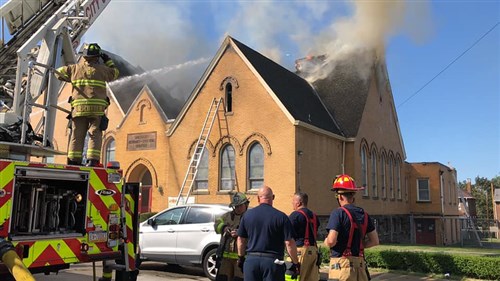 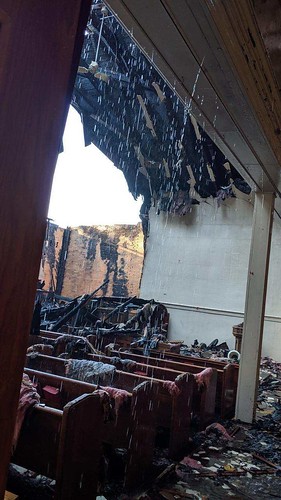 A four-alarm fire caused extensive damage to the Sheraden United Methodist Church in Pittsburgh on Monday afternoon, Sept. 9. With much of the roof burned away, a city inspector on the scene said the building would be condemned. The blaze, which was reported at 2:37 p.m., sent smoke and flames shooting from the roof as firefighters used aerial booms to direct water on the fire. Despite their valiant efforts, much of the the building's roof was gone by the end of the day.

No one was inside the church when the fire broke out, but workers were reportedly making repairs to the roof at the time. One city fire station is next door to the church, but personnel were on a call. The first of about 10 engines arrived on the scene in four minutes.

Each summer, the church offers hot, nutritious weekday lunches to neighborhood children as part of the United Methodist 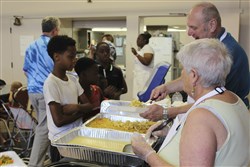 Church Union's Kids Meal Network. Though the congregation is small, it is has an active outreach ministry, has a weekly community Kids' Club and hosts other community events and groups.

The Rev. Barry Lewis, the interim pastor of Sheraden, Associate Pastor Roberta Farls and Pittsburgh District Supt. Dawn Hand were at the church along with Bishop Cynthia Moore-Koikoi while firefighters battled the blaze.  They gathered for prayer with others there.

"City Councilwoman Theresa Kail-Smith coordinated food for first responders and church folk that are here," Hand said. "We are grateful that no one was inside the church. We do invite your prayers for one of the firefighters who had a minor injury."

As evening approached, firefighters escorted leaders inside to survey the damage and remove what could be saved. A Bible, baptismal font and other items were brought out before the condemnation notices were posted.

"The roof is off most of the building," Hand said. "The inside has extensive damage. It doesn't look like it can be repaired."

UPDATE: A service of healing and celebration of ministry is scheduled on the lawn at the Sheraden church at 9:45 a.m., Sunday, Sept. 15. All are invited to come to show support -- and bring a chair. A community picnic will be served immediately following the service.

Sheraden UMC is yoked and shares pastors with Christ Community in McKees Rocks, a federated church. The two congregations worshipped together throughout the summer, alternating monthly between the sites. Leaders expect to continue with joint worship at Christ Community after Sept. 15.

The Sheraden congregation traces its roots to the 1880s when a sewing circle expressed interest in forming an interdenominational religious mission and a United Mission Sunday School held its first meetings in a school. On September 28, 1889 the Methodists of this group secured a charter for The First Methodist Episcopal Church of Sheradenville. The first Church building was built in 1903. An addition was constructed in 1930, and the entire building was extensively remodeled in 1961. The membership has been declining from 543 in 1968 to a little more than 100 currently.