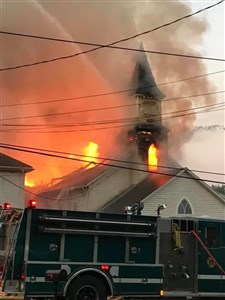 Early on Saturday, July 4, Pastor Lanfer Simpson of Mapletown United Methodist Church was awakened to news that his church was on fire.

The fire started in the parsonage, which is rented to a family with three young children, and quickly spread to the adjacent church. The family escaped through a bedroom window over the front porch while smoke and flames climbed the stairway. Two family members were treated for smoke inhalation and minor injuries at a West Virginia hospital. 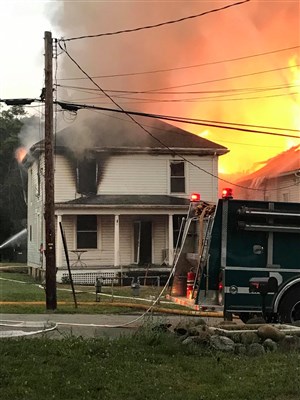 Both the house and church building were total losses, said Washington District Superintendent Paul Ritchey, who went to the scene. The fire marshal was investigating the cause of the fire.

“Several people on site, including Lanfer, were commenting that it is only a building, and the church is the people,” Rev. Ritchey said. “Everyone’s first concern was for the family."

In a church Facebook post on Saturday afternoon, Pastor Simpson said worship would continue as planned online and via conference call on July 5 and 12.  “We have an opportunity to envision the workings of the church among us,” he said. “Many have offered a temporary physical space to worship.”

He added that a meeting would be scheduled in the coming week to determine immediate next steps and envision long-term ministry. “This is a chance for us to think what it might look like,” he said.

In his Facebook post, Pastor Simpson said he was thankful for the brave men and women of the multiple volunteer fire companies who responded to the blaze. “They are often under- appreciated heroes in our communities. They deserve respect and our praise for their efforts,” he said. “There were no less than six companies working in unison today to fight this blaze. (This should teach us something about teamwork). 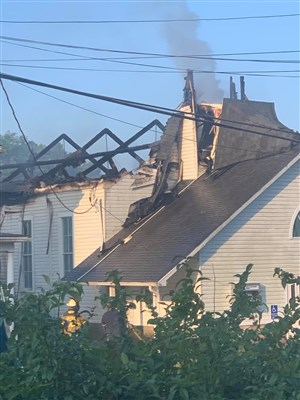 He also offered thanks for the many people from the community who offered water and snacks to the firefighters and the many people who asked how they could help the family and church. The pastor posted a list of clothing and furniture needed by the family, and offered this prayer:

Almighty God, creator and sustainer of life, we give you thanks this day that lives were saved. By your might those men and women who serve communities were strengthened and encouraged. May your grace continue to surround them as they recover from their work.

Lord, we ask for healing for the family that was displaced from their home. May they have physical, emotional, and spiritual healing this day. Surround them with love and care. As the church, allow us to minister with them. Help us to aid them in their re-building. Open us to ways of service, O God. Lord, we ask also to be made new. As a Phoenix grows from the ashes, so too might we as a body of Christ find re-birth from these ashes. Put forth within us, a burning to change and transform into what you might have us to be. Open us to new visions and new directions. Lord, we ask for your will to be done. In Jesus’ name. Amen

Days after the fire, Pastor Simpson told a reporter for the Washington, PA Observer-Reporter newspaper that what he will remember most about the fire "will not be the destruction of structures and the material losses, the strong demonstration of God’s work, of community spirit and pride, and of great hope." Read full story