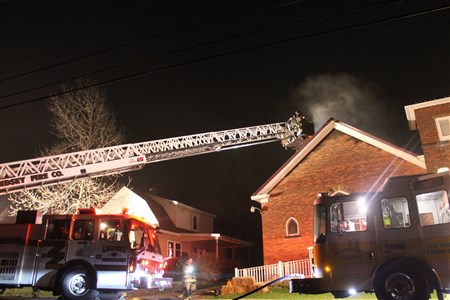 No injuries were reported in a four-alarm fire that broke out early Monday evening, Nov. 11 at Albion Heights United Methodist Church in Punxsutawney and severely damaged a wood frame addition to the back of the red brick church. The church was built in 1905.

"The fire was kept out of the sanctuary and we removed as much as we could from it," Punxsutawney Fire Chief Bryan Smith said in a Facebook post thanking all who came out to assist in fighting the blaze. "I do not know what the church’s future holds, but God will guide them."

The State Police Fire marshal   is investigating the fire with assistance from the ATF, the Chief said. 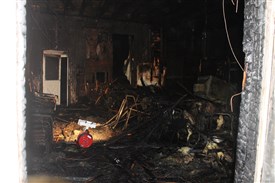 The blaze apparently broke out in the wooden addition, which was heavily damaged. There was smoke and some water damage in the sanctuary.

The church Facebook page contained this message the following day:

Thank you all for the prayers for our church. Your thoughts and prayers have been so comforting and a blessing to know that we have so much support during this very difficult time. We won’t know anything till we hear from the fire marshal and the insurance company, but we do know God loves us and is in control of all of this and we r trusting Him right now. Pray for our church family as this is going to be a process of grieving.

Pastor Joel Fugate said there will be an announcement later in the week about future services.
News