In the small Fayette County community of Point Marion, Christmas carolers this year include Fijians who have become an integral part of the ministries of Point Marion United Methodist Church.

Last year’s Christmas service at the church featured a choir for the first time in many years. It was made up of Fijians singing a capella in their native South Pacific island language. Since then the church has grown its ministries and expanded its outreach through the Fijian Language Ministry.

Many Fijians and their families moved to the Point Marion area from the state of California to work in the shale gas industry. Methodism is the major Christian religion in Fiji, so after first immigrating to California, the families established faith communities that came together for a combined worship service each month. When they moved to Pennsylvania, they looked for a church where they could do that and Point Marion UMC became that church.

The monthly worship, on the last Sunday of each month, is a traditional Fijian service in the native language of Fiji.  Initially it drew about 50 people, but attendance has climbed to over 100.  A community dinner with Fijian dishes follows each worship service.

Some of the Fijian families also worship weekly with the rest of the congregation at Point Marion and are very involved in ministry there, said the Rev. Bev Roscoe, the pastor.  Some are involved in other churches, such as Calvary UMC in Uniontown, but come to the monthly worship service. Several volunteer in community ministries.

As part of the Fijian Language Ministry of Western PA, Point Marion UMC received a grant to help people with GED prep and job prep. One of the Fijians had been a professor and offered to teach a GED course.

In addition, the pastor explained, “We provide resume prep at no cost to the community, and through our Bargain Corner Thrift Shop, which benefits our Food Pantry, we provide clothes (for work or interviews). We also help with job readiness skills, including interviewing, online application processes, and so on.”

When layoffs hit the fracking industry, the workers began to search for other jobs, Roscoe said. “With a recent expansion at Ruby Hospital (part of the West Virginia University Hospitals), they have struggled to find enough people to fill service jobs.

“Our Fijian liaison works at Ruby and began to refer them there. We also spread the word in the community.  When the HR director at the University Hospitals realized the number of people being hired from Point Marion, she asked if the church would partner with them and host interviews, the pastor added.

“So far, 30 people have been hired through the efforts of this ministry, which is primarily supported and operated by the Fijian Language Ministry as a way to help and support the community which has embraced them!” said Roscoe.

Point Marion UMC will host hospital interviews for service jobs from 9 a.m. to noon on Dec. 16.  These are full-time jobs with benefits. Resume Prep will be offered on Monday, Dec. 14 at the church.  To schedule email pmumchurch@gmail.com
or call 724-725-3366.

Since the Fijians have become involved at Point Marion, the church also has added a program for children in grades Kindergarten through 5, an enhanced children’s ministry which includes Fijians volunteers, and they offer one-on-one tutoring for both children and adults. They also reached 38 children through a VBS  program and plan a summer feeding program in 2016. “We are working on an after-school program mid-week, twice a month. We hope to start during Lent,” Roscoe said.

In addition, the church now has a weekly prayer group and weekly women’s ministry group and members are getting involved in United Methodist Ministry beyond the local church.

Roscoe said at least two members of the Fijian community will attend lay servants training, and plans are being made to have a lay servant come from California to teach the six-hour in Fijian in the hopes of developing leaders that can enter our Certified Lay Ministry program. 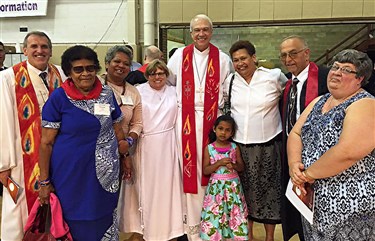 The president of the Fijian Methodist Church visited Point Marion in late June and invited the Rev. William B. Meekins, assistant to the Bishop, and Roscoe to their Annual Conference in August.

Members of the Fijian Ministry attended the 2015 Western PA Annual Conference and hosted the coffee bar in the display area on Saturday and Sunday.

This fall the Fijian Choir sang at the Connellsville District Worship and at the annual meeting of the Conference United Methodist Women. Roscoe and Maraia Gonelevu, a Fijian who moved to the area in 2012 and volunteers at the church, hosted a breakout session.

Point Marion UMC has not had an active United Methodist Women’s group for two years, but now the Fijian women plan to start one on January 23. “They are also going to actively support the local Food Pantry and weekend backpack program, which their ministry currently donates to,”  Roscoe said.

The day after Thanksgiving, the ministry hosted a Fijian Thanksgiving dinner with all the traditional foods, Roscoe added. “They invited the Bruderhof, who came and ate with us, and are building community by inviting them to go caroling with them as well.”

The Fijians are also participating in the all-church mid-week Advent program, where participants have made Christmas cards for Food Pantry volunteers and clients, assembled fruit baskets for shut-ins in the church and community and had a carol sing. On Dec. 15, the Fijians will present a program on how they celebrate Christmas in Fiji, sharing some music and traditions.

Connellsville District Superintendent Bill Blair sees the Fijians as being sent by God to the Point Marion community. And Roscoe said the Fijians “feel it was a mission from God for them to be moved here.”