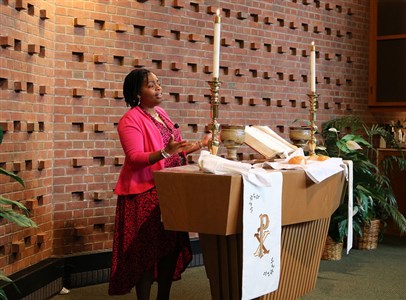 National and jurisdictional leaders of Black Methodists for Church Renewal (BMCR) visited Pittsburgh May 20-21 to share their stories with black Methodists and allies from the Western Pennsylvania Conference.  Sharon Gregory, WPAUMC Lay Leader, organized the gathering and issued an open invitation in an effort to revitalize the BMCR in the Conference.

Rev. Antoine “Tony” Love, the vice chairperson of the national BMCR, and Rev. Dr. Dred Scott, the coordinator of BMCR in the Baltimore-Washington Conference, highlighted the rich history of blacks in the Methodist Church. Historically, Black Methodists were game changers, they noted. The group also reflected on John Wesley's advocacy for abolition of the slave trade.

Both workshop leaders also highlighted a critical historical juncture in the denomination: in 1968, the Methodist Church was desegregated when the all-Black Central Jurisdiction was dissolved.

Today, as we take action for change, God calls us to “be the one,” according to Rev. Love. Job continued to be God’s servant even after everything was taken from him. Much like Job, we are called to be that one voice, continuing to be God’s servant, when others do not speak up about racism, he said.

Rev. Scott later exhorted those gathered to reject colorblindness. God loves us in all of our differences and the church is called to do the same, he noted.

Highlighting the continued work, Bishop Cynthia Moore Koikoi urged all to, “Strengthen our racial ethnic brothers and sisters in love and grace” as we “work for justice in our denomination.”

BMCR’s hope for the future is that black and white United Methodists work collaboratively in Christ to continue to dismantle racism and revitalize black churches in the UMC.