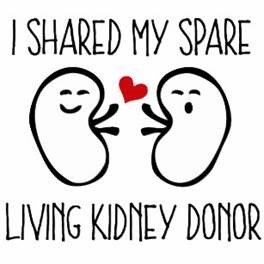 Amy Scott, an active member and youth leader at First Bethel United Methodist Church in the Pittsburgh suburb of Bethel Park, got a priceless gift a few days after her August 3 birthday this year -- a new kidney donated by the pastor of a church in a neighboring community, the Rev. Cyndi Bloise of Jefferson UMC.


The donor match was made as the result of United Methodist connections, but “it’s really God’s story,” said Rev Bloise. “It’s not about how great it is that Cyndi donated a kidney. It has a whole lot to do with how God engineered the whole thing.”

Amy, who was honored by the Western PA Conference as the Volunteer Youth Worker of the Year in 2013, has been living with kidney disease for 14 years. About two years ago, she decided to go through testing to be on the kidney transplant list.  She was approved for the “inactive” candidate list, but about a month later, her condition worsened. On January 4, 2017, she had to start dialysis and was moved to the active transplant candidate list at the University of Pittsburgh Medical Center (UPMC).

At the time, Amy didn’t talk much about her condition or her need for a kidney, but she became gravely ill in October of 2017 and began to think about finding a living donor.

“I shared with my pastor, Tom Barnicott, and he attended a Living Donor Seminar with me and took notes.  He said he wanted to help me find a donor and encouraged me to set up a webpage,” Amy explained. In January, they held an informational meeting at the church to find a living donor. Some of those who attended filled out donor cards, but none were a suitable match for Amy.

Last Valentine’s Day, a Facebook page seeking a donor for Amy went live and Cyndi Bloise saw some of the posts.

“I had met Cyndi through a women’s Bible study group at Jefferson UMC,” Amy explains. “The group was started by Sandra Marsh-McLain, who was the pastor of my church before she was moved to Jefferson. Cyndi became pastor of Jefferson in July of 2017 and she kept the group going.

“When my Facebook page launched, she saw it and started asking questions. She was hoping to promote it,” Amy said. “In talking one day, we learned that we were the same blood type. Two days later, she texted and said she had talked with her husband and wanted more information on becoming a donor. She applied online.”

Although Cyndi filled out the application and appeared to be a viable candidate for testing as a donor, she didn’t hear anything about the next steps. Amy said others who applied received phone interviews and were tested.

“She knew how important it was to me, so she called and was told she could be tested at the beginning of May,” Amy added.  But again there were delays and eventually Cyndi had tests at the end of May and learned she was healthy enough to donate and would be put on a pairing list.

“By annual conference (June 8-10, 2018), she still had heard nothing, but was patiently waiting,” said Amy. Eventually, while Cyndi was on a trip to Red Bird Mission in Kentucky, Amy got word that she was a match, but would need one final test before a date could be set.

All the delays in testing and notification were a bit annoying, but from Cyndi’s perspective, if God had not engineered them, she could not have been the donor.

“I have struggled with my weight for some years,” she said, “and if your BMI is over 30, you can’t be a donor.  Last January, I started a weight loss program. Usually it’s hard to stay motivated, but this time I stuck with it.

“After a month, I saw Amy’s Facebook post that she needed a living kidney donor. It never crossed my mind that it would ever be me.  Even though it kept popping back into my head, I thought it was not an option,” she explained. She expected resistance from her husband, who tends to worry about her, and from their family.

“But in March, I talked with (my husband) Frank and, rather than objecting, he said it sounded like something I would do,” she said. Their daughters also readily accepted the idea.

“I kept losing weight and I applied to be a donor, but they never called back.  When they did, my BMI was 29.8 -- just under the line to be considered.  If they had gotten back to me any sooner, I couldn’t do it,” she said. “This is a story of God taking care of things.”

When Cyndi got the phone call during her church’s mission trip to Red Bird, she said she was very excited about it. “A parishioner was with me in the car. She was so excited that it helped me feel better about taking time away from the church,” Cyndi said. “There has not been a negative word from anybody in the congregation. They said they are so proud of this. It was a good thing.”

Other clergy and lay people pitched in at the church during Cyndi’s surgery and recovery. “Tom Barnicott has been on call for emergencies,” Cyndi said. She named other former pastors who came to preach on Sundays.

As Amy said in a Facebook post the day before the surgeries at UPMC Montefiore Transplant Center: “Today was hopefully the last day for a very long time of dialysis treatment. I cannot thank Cyndi Bloise enough for stepping forward and becoming my kidney donor. You truly are an amazing person and glad God put us on the same path to meet. Glad Pastor Tom Barnicott became my advocate to promote finding someone. Big day tomorrow.”

Cyndi said the two days of testing were “uncomfortable, but not painful. I was so afraid they would find some problem and I didn’t want her to be disappointed,” she added.  “I think the first thing I said when I woke up after surgery was, ‘How’s my kidney doing?” And they said it was working very well.”

She wants people to realize that the life-giving donation was God’s will, not hers. “I feel like that’s really important. It’s a call --not that much different from being called into ministry,” she said. “It’s your charge and you had better listen.  Things were so well engineered. To not do it would feel like you were being disobedient to God.”

A few weeks after the surgery, Cyndi, whose maiden name is Roop, and Amy learned that they may be related going back more than 100 years.

“Amy's uncle Ronald from Texas, who is into ancestry, contacted me about my maiden name because they have Roops from Maryland and PA in their line. It turns out I am descended from one of two brothers who came from Heidelberg, Germany in 1750, landing in Philadelphia. She has some Roops from Maryland in her ancestry, apparently with big families, and most of my Roop ancestors  were in Union Bridge, Carroll County, MD for many years," Cyndi said. "So, is it possible that I was a tissue match because we've got some DNA stuff in common?  I gave Ronald the details I had about my ancestors there and hopefully that will help him further connect the dots.

“I find it to be a really awesome part of the story because it tells me that God wasn't just busy engineering this in 2017-18, but truly had planned ahead almost 100 years! I've been thinking about it for several days and I'm still blown away,” Cyndi said.
News