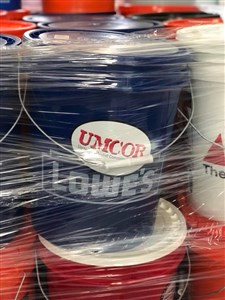 After several areas of southwestern and central Pennsylvania experienced flash flooding in early September and Hurricane Florence made landfall around Wilmington, NC on Friday, Sept. 14, the need for UMCOR cleaning buckets and hygiene kits became urgent.  Invitations came in early October for Early Response Teams from Western PA  (or teams lead by a trained ERT volunteer) to come to both North Carolina and South Carolina to help in Florence clean-up. Pastor Calvin Cook, WPAUMC Disaster Response Coordinator, offered updates on Oct. 8, before Hurricane Michael approached the Carolinas. See info below under Florence Response.

In Western PA during one week in mid-September there were an estimated 1500 Cleaning/Flood Buckets distributed by Eastbrook Mission Barn either through our own distribution network or with the help of the Salvation Army.  The buckets went to at least eight counties in Southwestern/Central PA.

"The supply of buckets is now low and we want to encourage you to help replace of these buckets, either through financial contributions or  making your contributions or bringing completed buckets to the Eastbrook Mission Barn or one of its satellites. Contact EMB Director Katie Peterson at  724-856-8241 or missionbarn@gmail.com.  Get up-to-date recipes for cleaning buckets and hygiene kits at UMCOR.org/UMCOR/Relief-Supplies.

Those seeking help should contact their District person or call 211, which is a great resource through which people can be directed to the appropriate community agencies for help.

United Methodist Early Response Teams or volunteer teams led by a trained ERT received invitations in early October to come to North Carolina or South Carolina to help. Teams will be responsible for their own lodging and meals. Previously teams only teams from within Southeastern Jurisdiction of the UMC were invited to respond.

"They are now ready to accept ERTs from outside the Southeast and they will accept both regular ERT and ERT-led teams (at least one person including the leader must have ERT training)," said Cook.

Teams interested in volunteering in North Carolina can contact disasterresponse@nccumc.org or call the NC Conference Disaster Call Center at 1-888-440-9167 directly. In South Carolina, which needs teams in the PeeDee region of the state and indicated it could provide housing, contact Chuck Marshall at 803-386-7217 or sp_disasterresponse@umcsc.org. After making arrangements, team leaders should notify Cook or WPAUMC VIM coordinator Sandra Matoushaya about when and where they are going.

"Eventually, both the North Carolina and South Carolina conferences will need volunteer teams to help with mucking out homes and with long-term recovery. But for now, leaders in both conferences ask for people to financially support UMCOR and conference relief efforts, prepare relief kits and most importantly, pray.

Steve Taylor, a home missioner and director of connectional ministries in the North Carolina Conference, lives in hard-hit Lumberton, which still hadn’t fully recovered from Matthew when Florence inundated the city.

“Knowing that people are praying for us, I can’t tell you how much that means,” Taylor told United Methodist News Service. “It’s like someone is throwing us a life preserver.” Read UMNS story

As local church Volunteers in Mission teams consider trips for the upcoming year, think about helping in areas of South Carolina that were still recovering from devastation floods in 2015 and damage from Hurricane Matthew in 2016.

"Florence is taking aim at a smaller geographic area, but there could wind up being more need. That said," he added, "many of the remaining homes that need work from previous disasters are outside the area where Florence hit."