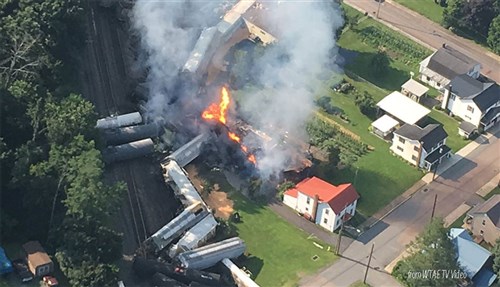 Two United Methodist pastors and their family members were among the residents of the Bedford County community of Hyndman who were evacuated Wednesday, August 2 when a CSX freight train derailed, sparking fires when liquefied natural gas leaked from one and molten sulphur leaked from another. Most residents were allowed to return to their homes Saturday afternoon, August 5.

About 32 cars of the train tumbled from the tracks, prompting the evacuation. The train was traveling from Chicago to Selkirk, N.Y., and consisted of five locomotives and 178 rail cars, according to a CSX statement. “Of those, 128 cars were carrying mixed freight, including the materials involved in the incident and construction materials, paper and wood pulp. There were 50 empty rail cars on the train.”

The United Methodist Church in Bedford, PA served as one of two community outreach centers set up to aid affected families, first providing temporary shelter, and later collecting and distributing supplies and information.

CSX said that the chemical fires were extinguished by local firefighters by Friday morning and, said at 4 p.m.  that the sulfur fires that burned throughout the day were also out.

Beginning at noon Saturday, most residents were permitted to return home. In a statement, CSX said:

"The Hyndman cooperative incident management team and environmental experts have determined it is safe to reduce the evacuation zone to a limited area immediately surrounding the derailment site. The majority of evacuated residents can safely return home after 12 p.m. Saturday, August 5.

This decision was made after a highly sensitive air-quality sample was analyzed by an American Industrial Hygiene Association accredited lab and showed no impact to air quality. A reduced perimeter is being maintained for the sole purpose of protecting residents from the impact of site restoration activity. Site restoration work includes heavy truck traffic, movement of derailed cars and other noisy, disruptive activity 24 hours per day.

As emergency responders worked tirelessly at the scene Wednesday and Thursday, Bishop Cynthia Moore-Koikoi, other church leaders, and the area pastors asked church members and friends to join them in prayer not only for the evacuated residents, but also for the firefighters and workers.

Pastor Fred Zickefoose of Hyndman Grace UMC and his family found lodging in a motel when they had to leave the area.  In a post on the church's Facebook page Wednesday night, he said:

"It has been some day. To the best of my knowledge everyone has a place to stay, either with family or in a hotel. Joyce and I, and the dog, ended up at the Sleep Inn and Suites. We have our cell phones with us, and have service; if anyone needs anything please call us. There is destruction and confusion, but no loss of life and for that we can praise God. Nothing can separate us from the love of God: not even a train derailment."

In a Thursday night post, he noted that he was told when he moved to the area a year ago that "Hyndman has the greatest first responders. I've gotten very splotchy news over the past two days, but one thing I read today is that Hyndman's own first responders have been on site since the beginning. Continue praying for those men and women that keep us safe. We are proud to call you our own.”

Meanwhile, Bedford United Methodist Church, not far from Hyndman but located in the Susquehanna Conference of the UMC, also posted its thanks on Facebook, writing:

“Once again we were blessed to see such positive community involvement as we continue to operate and maintain a care facility at Bedford United Methodist Church. Many thanks for the involvement of the American Red Cross, CSX, the Bedford County Library, The office of Senator Langerholc, Alum bank Dollar General, Agency on Aging, Lebanon Christian Church, many individuals and organizations who donated supplies and time, but above all to the emergency responders who are out caring tirelessly for the situation at hand. This is an opportunity where we can come along our brothers and sisters in Christ and put our words of love and support in action. Thank you again for everyone's love and prayers during this time.”

Connellsville District Superintendent Bob Zilhaver said Thursday he had talked with both Zickefoose and Rev. Kenneth Haines, pastor of the Four Point Harmony Charge that includes First Avenue UMC in Hyndman. Both, he said, were grateful there had been no injuries and were awaiting news of when they could return to their homes and churches. At that point, Zilhaver said, there was no indication of whether Sunday services could be held in either of the churches in the evacuated area. But services were expected to go on as usual in the other churches of the two charges.

In its Friday evening statement, CSX said it was continuing to remove derailed cars from the site. Through the day, a total of 20 rail cars were either re-railed and prepared to be removed from the site, or cleared from the site and repositioned to safe locations for removal later.