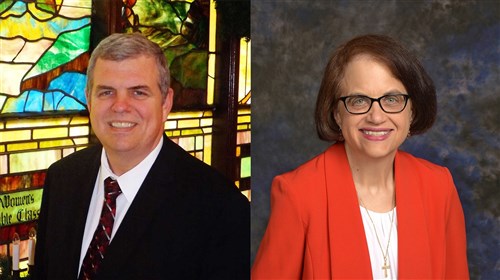 The endorsements were made at the February 15 delegation meeting after candidates who had been nominated through a process the delegation set up last Fall were interviewed by three groups of delegates. Each candidates submitted a biographical statement and a theological statement outlining their understanding of how their spiritual gifts would find expression through the role of a bishop.

Through an extended period of prayer and discernment, the delegation voted to endorse Zilhaver and Dunn, said Vicki Stahlman, a lay delegate who serves as vice-chair of the delegation and announced the endorsements.

Dunn, as the first elected clergy member of the delegation, currently serves as its chair and Zilhaver is secretary. Their names will be forwarded to the Annual Conference, which may, by vote, endorse one or both, or may consider endorsing other ordained elders.

The delegation made its decision to endorse candidates fully aware that further developments in the life of the denomination may impact the election of bishops this summer, Stahlman said.  However, she added, "the delegation is proud to recommend these two very gifted servants of God for consideration."

In addition to their leadership with the delegation, Zilhaver and Dunn have served together in various roles throughout their ministries. For 30 years, Dunn and her husband, the Rev. Keith Dunn, served as deans of a Music, Drama, and Creative Arts Camp at Wesley Woods, while Zilhaver and his wife Amy were deans of a Mini-Camp at there for 22 of those years.

When Bishop Cynthia Moore-Koikoi appointed Zilhaver as superintendent of the Connellsville District in 2017, Dunn was the Johnstown District Superintendent and dean of the Cabinet. When her 8-year term as superintendent ended, she was appointed as Director of Connectional Ministries and continues to serve on the Coordinating Cabinet in that role.

Both have a passion for youth ministry and have served in leadership roles in Western Pennsylvania Conference and beyond. Both serve on boards of General Church agencies and as members of the General and Jurisdictional Conference delegations several times. Both also have been advocates for women in ministry.

Zilhaver was a delegate to the 2004, 2008, 2012, 2016 General and Jurisdictional Conferences. He serves on the executive committee of the General Commission on the Status and Role of Women (COSROW) and chairs its finance committee. Previously he served on the General Board of Discipleship and its Upper Room Division, as well as on the Division on Ministry with Young People representing adult workers.