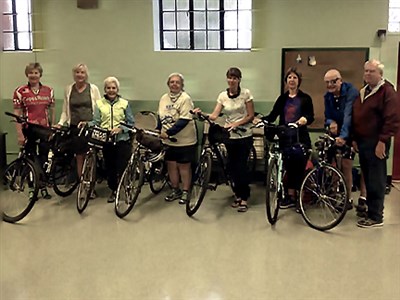 The people of Boston United Methodist Church in McKeesport, PA are used to seeing unfamiliar faces around the church, which sits along the Greater Allegheny Passage (GAP), a bike trail that runs from Pittsburgh to Cumberland, MD and connects to the C&O Canal Towpath to Washington, DC. The church attempts to reach out to those who pass by on the trail.

Karen Prescott, a retired pastor who is part of the congregation, said she has passed out bottles of water to people on the trail. “I have met a number of people from other countries biking from Pittsburgh to Washington D.C. or Washington D.C. to Pittsburgh.”

On May 20, however, Prescott and others from the Boston congregation welcomed overnight guests -- a very special group of riders participating in Bike for the Cure 2016 as part of “Bikin’ the Trails for HD,” a 400-mile ride to Baltimore, MD for the 31st Annual Huntington’s Disease Society of America Convention, June 2-4.

Leading the group was Charlotte Reicks, a United Methodist from Grand Junction, Colorado, where First UMC hosts a Huntingdon's support group.  Charlotte is 80 years old and was on her 18th bike ride for Huntington's disease and her 24th year of cross-country bicycling for a charity. She was a teacher for 25 years in Michigan, at Grand Junction High School, and at Mesa State College (now Colorado Mesa University). The past 20 years Charlotte has been a legal secretary and now is a medical transcriptionist. She uses her bicycle “Annie” as her primary means of transportation! 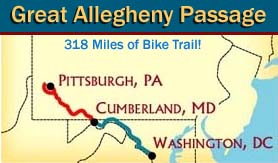 Each of the group heading to the Huntingdon's convention has been touched by the disease. Some have children and spouses who have died from it, some carry the disease and are fearful that they have passed it on to their children. They all have lost friends to the disease and that is why they are so passionate about riding for the cure and raising awareness and funds, Prescott said.

The group arrived at the Boston church mid-afternoon after biking 21 miles from the city of Pittsburgh. Along with a place to shower, change and spend the night, the church also treated the cyclists to a spaghetti dinner with salad, homemade lemon and coconut cream pies. They also enjoyed the fellowship with church members.

Here's how Charlotte described the hospitality on the group's blog:

In the morning, while waiting for a break in rain that started overnight, the hospitality continued with a breakfast of egg casserole, bacon, bagels with cream cheese and homemade apple butter. Though the rain didn't stop, they eventually gathered in a circle for prayer and departed.

The group was expected to complete the journey to Baltimore on June 2, with overnight stays during the two-week ride in various cities in Pennsylvania, West Virginia, Maryland and a couple days of touring in Washington, DC.

Boston UMC members are following their progress via the Bike for the Cure web site at bikeforthecure.org/wordpress/.
News