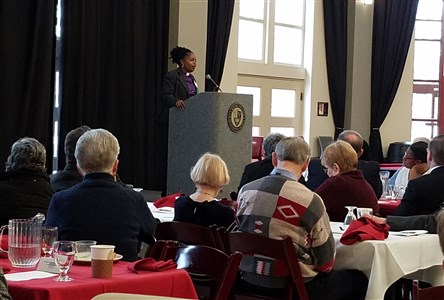 The work of creating a community where diverse people can work together and live in harmony is difficult and messy, but God gave us the ability to do it, Bishop Cynthia Moore-Koikoi said during a Martin Luther King Day Unity breakfast at LaRoche College in Pittsburgh’s North Hills.

In the scripture (Gen. 11: 1-9), God intervenes when a prideful people try to build a tower to the heavens by confusing their language, making it hard for them to understand each other, then scatters them over all the earth.

Bishop Moore-Koikoi said she had unexpected difficulty understanding the language of the young people with her on a recent trip to Cuba, although they were all from the Northeastern U.S. Some of their expressions were rooted in popular video games and social media.

“I got to recognize that teenagers and young adults in our culture have constructed their own language based on their experiences.  I became an outsider trying to understand.  But they valued our relationship enough to share who they were and what they were saying so I could understand,” she said.

“We have to honor others enough to take the time necessary to sit down and share who we are with them," she explained.

“While the teenagers let me in on their tribal language,” the Bishop added, “I don’t understand the tribes whose language insults the homelands of people of color or those who focus on figuring out ways to keep them away from us.”

The spiritual leader of just over 1,000 United Methodist clergy, about 98 percent of them Caucasian, Bishop Moore-Koikoi said one pastor told her that “if we stopped referring to ourselves as African American,” it would help break down barriers to relationships.

“He asks me to deny my heritage in order for his tribe to feel comfortable,” she said. “But as difficult as it is, it is my obligation to try to understand their feelings of anger, fear and frustration.

“(If I don’t) then I am guilty of putting my tribe and our experience above their experience and that is not honoring diversity.”

It’s particularly hard, she acknowledged, when you struggle to see God in another group of people. “All of our tribes have fallen short. We can honor their feelings and experiences even if we don’t condone their behavior. Martin Luther King would want us to try.”

In today’s culture, social media has helped to expand our tribes and allow more global affiliations, but its algorithims “contract our diversity and isolate us in our tribes. So the tribes are larger, but less and less diverse.

“And just as some want to build a wall to keep people out, we have built fences in social media to keep others out. We have to acknowledge our own sin,” Bishop Moore-Koikoi told about 200 people at the unity breakfast.

“We believe God created diversity...but it is difficult and messy to get along with one another. But God has given us all that we need in order to move through the messiness!” she said.

She illustrated the point with the story of Pentecost in Acts 2, where people from all nations were together in one place:

Suddenly a sound like the blowing of a violent wind came from heaven and filled the whole house where they were sitting.  They saw what seemed to be tongues of fire that separated and came to rest on each of them. All of them were filled with the Holy Spirit and began to speak in other tongues as the Spirit enabled them.

Now there were staying in Jerusalem God-fearing Jews from every nation under heaven. When they heard this sound, a crowd came together in bewilderment, because each one heard their own language being spoken.

“God has given us the ability to get along together...To make Martin Luther King’s dream come true…,” the Bishop said, adding:

“We have the power because God gave it to us. I think Dr. Martin Luther King would want us to make some sacrifices in order to use that power. He was willing to give up his life. What are we willing to give?

“Are we willing to just give an afternoon to sit and talk to someone who is not like us?...To have coffee and talk with some who is different from us?  Can we hold off a response on Facebook that will shut down conversation and instead open a conversation?

“What if all God’s children were able to understand one another?”