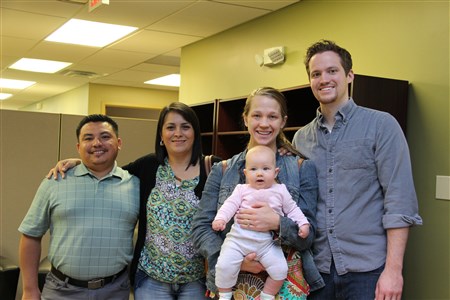 One of the most moving moments in Costa Rican Methodist Pastor Eddier Cortes visit to Western Pennsylvania came at a state prison.

During their stay with members of Bakerstown UMC, a partner congregation to his, Pastor Eddier and his wife Jessica spent two days with the Rev. David Stains, pastor of Beulah UMC in Johnstown. Stains and his wife Beth led the mission study on Latin America at the 2015 Mission u and for years he has spearheaded the Encounter with Christ in Latin America mission initiative in Western PA. He's also a veteran leader of mission trips to Latin America.

Fluent in Spanish, Dr. Stains has also been involved in prison ministry wherever he has been appointed in Western PA, often working with Hispanic inmates. With the blessing of the author, he translated the Disciple Bible Study into Spanish, working with the late Dorie Heckman.

Stains took Cortes to the State Correctional Institution at Somerset, where a few months ago began offering a worship service in Spanish. Pastor Eddier preached at the service.

“It was very moving to see the liberty that they feel in worship even though most of them are in perpetual chains (serving life sentences),” he said during a visit to the United Methodist Center, where Rebecca Swineford Clapp served as translator. "They said, ‘We find our strength in the shadow of God’. This filled my heart.

"In that moment there, it was really special for me. I really believe that God brought me there to show that the love of God can reach even someone like this.  Also to bring comfort to these people," Pastor Eddier said. "One man said he has been there already one or two years and he has lost all opportunity to leave. So he only experiences comfort from these Hispanic worship services."

About 200 of the 2,370 inmates at SCI Somerset are Latinos and about 70 of them are Christians.  Fifty or 60 attend the services, he said.

"They had been praying for eight years for worship services," Cortes explained. "Pastor David (Stains) began the services two months ago.  It was a really moving experience to see that love of Christ despite being in perpetual chains."

"He has led the Church in significant evangelistic and social justice ministries," said the Rev. Dennis Swineford, pastor of Bakertown United Methodist Church, which has been sending mission teams to Palabra Viva for 10 years.

During worship services at Bakerstown, Pastor Eddier preached, reporting to the congregation on how God is working through the ministries there. Pastor Swineford described the message as a Holy Spirit moment that was exactly what the church needed to hear.  They celebrated the partnership between the two congregations by signing a new 10-year covenant agreement.

He also participated in the baptism of Evangeline, the infant daughter of Bakertown’s Youth Ministry Director Rachel Whipple and her husband Luke, who serves as student pastor at the church. The family is shown in picture above with the Pastor Eddier and Jessica Cortes.

A career pastor with the Methodist Conference of Costa Rica, Pastor Cortes has hosted many UM Volunteers in Mission teams from the United States. Costa Rica has been a center for Methodist missions for over 100 years.

While in Johnstown he connected with a Hispanic congregation during a mission program for area congregations hosted by Beulah UMC. He also planned to join Bakerstown volunteers as they serve a meal at Roots of Faith ministry in Sharpsburg.