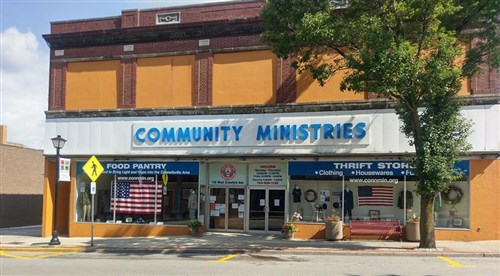 Someone threw a brick through front door glass at Connellsville Area Community Ministries (CACM) early on the morning of Sunday, Oct. 27 and removed a donation jar and a safe, among other things. CACM is one of the Western Pennsylvania United Methodist Conference's six regional mission agencies.

“Please join us in prayer for those who committed the crime. They are obviously in a difficult place and need help,” said a CACM Facebook post on Sunday.

On Monday evening, John Batronis, 54, of Connellsville was arraigned before a magistrate on burglary and related charges and jailed in lieu of posting $20,000 bond. Police said they recognized Batronis in video surveillance footage and brought him to the police station, where he confessed to breaking into the thrift store on Sunday morning.

Taken in the burglary was a glass donation jar with cash and a heavy safe containing cash and checks. Police indicated that they expect to make additional arrests.

Community Ministries Executive Director Rita Smith told Joe Abramowitz of the Connellsville Daily Courier that Connellsville police informed her Sunday morning about the burglary at the West Crawford Avenue store. She said the safe contained several hundred dollars, including some checks, and estimated the jar held less than $100, mostly coins with some paper bills.

Given the weight of the safe, Smith and CACM Board President Barry Craig told the Courier that the burglary likely involved more than one person.

"The donation jar could be seen from the store window," Craig said, adding that the ministry will “be more careful in the future.”

Craig told the Courier that news of the burglary angered Mayor Greg Lincoln, who he described as “a great supporter of Community Ministries." On Sunday, Lincoln posted this on his Facebook page:

“I have been disgusted all day. I can not believe that individuals smashed the front door of the Connellsville community ministries building downtown and stole a donation jar and a safe. The one organization that goes above and beyond everyday for anyone that needs assistance in this community should never be victimized like this EVER!! And someone knows who did this too. Please turn these people in to the Connellsville police department. 724-628-2501 ext 110. This can be done anonymously...

“The money that was stolen is now not going to the people that need it the most. This time of year is the hardest for so many In our community. The community ministries needs our help now more than ever.