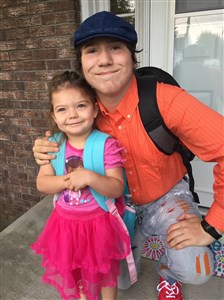 An unfounded rumor posted on social media in southwestern Pennsylvania just days after the mass shooting at Florida’s Parkland High School accused the son of the local United Methodist pastor of planning to shoot up Carmichaels Middle-Senior High School the following Monday.

The post, which included a photo apparently taken by a classmate, went viral over a weekend. Parents reposted it, prompting multiple calls that sent local police to the home of the eighth-grade honor student at 1:30 a.m.  They, like school authorities the previous Friday, determined there was no truth to the rumor.

The Rev. Dayton and Gay Mix decided to address the bullying of their son on their Facebook pages.  They wrote:

“It is with heavy hearts that we share with you, our friends and family, that our Joshua has been the victim of a rumor that he intended to go to school this morning to shoot up the school. We are choosing to address this publicly since his name has been used publically on social media in connection with this rumor. Josh came home from school on Friday, saying he had been called to the office regarding the rumors. He said that a girl came up to him, telling him that she had a dream that he had kicked a teacher, and had taken a gun and began shooting all the girls in the school.

The school investigated, labeled it unfounded, and apparently did not think it even worthy of a phone call to us as parents. But by last night, this rumor traveled over social media, prompting concerned parents to call 911 and the local police, who came to our door at 1:30 a.m. They too realized that Josh was the victim of these unsubstantiated rumors.

Most of you know these facts, but in case you don't....

Josh is 14, in the eighth grade, and is a high honors student. He lives his life to reflect the love of God. He is a respectful and obedient son, and a loving sibling to his 5-yr-old sister, and incredibly kind and patient with our 16 yr old nonverbal autistic foster daughter. He plays percussion in the band, sings in the middle school choir, has a lead role in the upcoming musical "Anything Goes", serves as liturgist at church, is a member of the church youth group, and is a Boy Scout second class. He also plays on the church dartball team. His favorite pastimes are running and listening to music. While he has had training in how to handle a gun through Boy Scouts, hunters’ education, and supervised experience at a gun range with his uncle, he has no access to one, nor has he expressed interest in having one for hunting. There are none in our home.

Scripture promises that what Satan intends for evil, God will use for our good. We ask for your prayers as we seek to bring truth to light, and especially pray for Josh's safety as he heads back to school tomorrow. We know that Jesus walks with him, and that God's protection is better than bubble wrap and kevlar, which is what this mom wants to wrap him in. While we wrestle with our very human emotions, we will not walk or hide in fear. No weapon formed against you shall prosper, and every tongue which rises against you in judgement, you shall condemn. This is the heritage of the servants of the LORD, and their righteousness is from me, says the LORD. (Isaiah 54:17)


Good, in fact, did come out of something intended for evil, Rev. Mix said. “Every step of the way God has been with us. We had faith that God would bring the truth to light; and that which was meant for evil would be turned into good. We have just seen that happen.”

He said that by 7 a.m. Monday morning, “the police were at our door saying they would escort Josh to school for HIS safety.

“The community has come around Josh and supported him -- hundreds of people,” he added.
“He was playing dartball at the church and kids came and gave him hugs, brought him cards and said ‘We’re standing with you.’ Word went out for kids to wear a green shirt to support Josh on Tuesday.  He walked into this not knowing if he had many friends. But so many have told him, ‘We’ve got your back.””

“Tuesday was amazing. It began with an invitation for Josh to ride to school with a friend. It continued with a few friends showing their support by wearing green shirts. Several teachers gave Josh words of affirmation, or gave him an opportunity to share his experience. Last night two groups of friends showed up with gift baskets filled with lots of candy, chips, and gifts that he shared at a musical practice today.”

The post concluded with an expression of thanks to all who had responded with messages of support and ended with a simple sentence: “My son smiled today.”
News