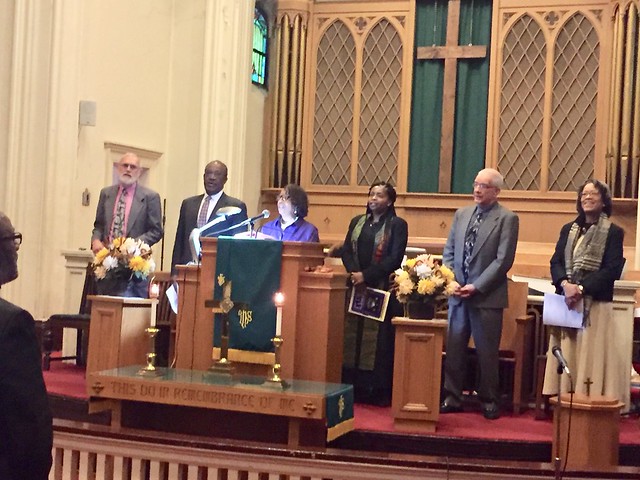 The combined celebration is an outgrowth of friendships formed among people of the two churches through a group called Wrestling with Racism, launched nearly two years ago. The group has built community and gained understanding of racism by studying together, discussing issues, going to movies and sharing meals.

The week of celebration begins with a joint 11 a.m. worship service at First UMC featuring a combined choir and worship leaders from both congregations, followed by a fellowship dinner. Jeff Miller of First UMC was the speaker.

On Saturday, Nov. 18,  a concert honored the life and music of Harry Burleigh, a nationally known African American singer and composer. His pioneering solo arrangements of spirituals 100 years ago played a major role in saving them. Burleigh was a native of Erie. The choirs of Warren UMC and First UMC, and the Mt. Ararat Baptist Church Male Chorus participated along with Pastor Leslie Boone and other musicians. Dr. Jean E. Snyder, author of Harry T. Burleigh: From the Spiritual to Harlem Renaissance, shared the history of Burleigh’s connections with Western Pennsylvania.
“Community gatherings” to build relationships among the people of both churches were held during the week. Each gathering included hosts and participants from both congregations. “The idea is for members of the sister churches to get to know each other better by gathering around a table for good conversation and food,” Alecia Gibbs, chair of the celebration, said.

The Nov. 19 service at Warren featured the combined choirs of Warren and First and had greeters and worship leaders from both congregations. Bishop Moore-Koikoi’s message, “Dressed in Love, Bound in Perfect Harmony” was based on Colossians 3:12-14.  A fellowship dinner followed the service.

The Anniversary Celebration focused on the theme Put on the Garments of Praise, based on Isaiah 61:3.  Alecia Gibbs, the event's chair, is part of the Wrestling with Racism group, led by Pastor Don Blinn of Warren UMC and Tracy Merrick of First Church.

Alecia Gibbs of Warren UMC and Pastor Jim Walker of First UMC are seen in the video prepared by the WPAUMC Anti-racism Team in Spring 2017.