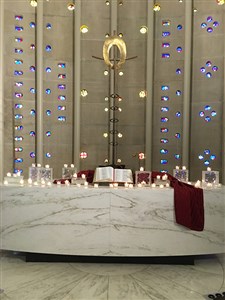 Western Pennsylvania United Methodist churches are offering services and opportunities for prayer, reflection and remembrance for those affected by the mass killing in Orlando, Florida last weekend.

In California, PA, about 30 individuals gathered on the front steps of the California United Methodist Church on Tuesday, June 14 and prayed for acceptance of LGBT people and for those killed and wounded in Sunday's bar shooting in Orlando, Florida.

“We will gather to remember and mourn those lost to extreme hatred in Orlando, said the Rev. B.T. Gilligan in announcing the vigil. “We will stand with one voice and say that this should not be a normal part of life.” He encouraged those not able to join the group to pause for a moment at 7 p.m. and say a silent prayer that violence would end.

Gilligan, led the service with the Rev. Tara Wiederstein of the United Church of Christ. As the names of each of those killed was read, the church bell tolled.

Christ UMC in Bethel Park opened invited the community and congregation for a time of prayer and reflection in the sanctuary beginning at 4 p.m., followed by a service of prayer and remembrance, healing and hope on at 6:30 p.m., Wednesday, June 15.

“There is a need to provide a space and time for all those in our church and community who are hurting and uncertain and trying to come to grips with what happened early Sunday morning in a nightclub in Orlando, Florida,” said the Rev. Duane Thompson, senior pastor.