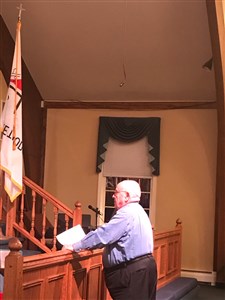 United Methodist churches in Pittsburgh and beyond acted immediately to provide opportunities for their congregants and communities to come together to mourn and honor the 11 people murdered at their city synagogue on Saturday, Oct. 27, to pray for the wounded and emergency responders, and to seek God’s guidance in taking next steps toward healing and reconciliation in the region and nation.

Many United Methodists also took part in interfaith services and vigils in the city -- in the business district of the Squirrel Hill section near the Tree of Life synagogue, at Soldiers and Sailors Memorial Hall on the University of Pittsburgh campus, and on the nearby Carnegie Mellon University campus.

The events brought some comfort to the participants as well as leaders and members of the Jewish community and the general public.

Three United Methodist pastors who have been advocates for those living with disabilities served as volunteers at Rodef Shalom synagogue during services for David and Cecil Rosenthal, brothers who were beloved regulars at Tree of Life synagogue.  “Rev. Chad Jeremy Bogdewic, Rev. Beverly Gross,  Tina Rusiski, and I were honored to serve at the combined funeral of David and Cecil Rosenthal,” said the Rev. Bev Roscoe, lead pastor of the South Fayette Cooperative Parish in the Uniontown area.

“We were simply present, serving coffee and water to mourners, firefighters, and police officers. It was awe-inspiring to see politicians and professional athletes standing alongside adults with disabilities, Jews, Muslims, and Christians embracing each other, and persons from every race walking hand in hand and standing shoulder to shoulder.

“As I walked to my car,” she added, “I found myself wondering why it takes tragedy to bring us together, hate to unite us, and loss to make us realize how much we have.”

The Rev. Dr. David Morse, a retired elder, seminary professor and president of the Monroeville Interfaith Ministerium, and Rev. Scott Gallagher, pastor of Garden City UMC, were among the United Methodists participating in an Oct. 28  interfaith Peace, Unity, and Prayer vigil at Temple David which stressed the importance of community.

Gallagher later proposed that, as a sign of support and solidarity all houses of worship consider changing one white light bulb in their sanctuary or entry way to a blue light bulb. He suggested keeping the blue light in place until the congregations at Tree of Life Synagogue are again able to worship there or in other permanent sacred space. Worship now is continuing in temporary locations.

“Why a blue light?  In Judaism blue represents divinity and balance.,” Gallagher said. “ I know we can all agree that we need God’s presence to bring balance and peace in our divided world.”

During a forum entitled Tolerance is Not Enough at Christ UMC in Bethel Park the day after the shootings, Rabbi Abie Ingber, the son of Holocaust survivors and a global leader in interfaith engagement, offered some steps that help move people beyond tolerance to genuine love and respect. There was a visible police presence at the Sunday afternoon event, which had been scheduled months ago.

At Faith UMC in Delmont, Judah Samet was scheduled to speak Sunday on his experience during the Holocaust but first told of surviving the massacre at Tree of Life because he was four minutes late arriving.

Some churches, like First UMC in Ellwood City, heeded Bishop Cynthia Moore-Koikoi’s call to spend 17 minutes each of the seven days after the massacre in silent reflective prayer.  The Ellwood City Ledger reported on the prayer effort.

Brandon Moore, a declared candidate for ministry, organized an Oct. 30 vigil at the Harmony-Zelienople UMC. A cantor from Congregation B'nai Abraham in Butler offered  the Jewish prayer of mourning, readings from the Psalms, the reading of each name and lighting of eleven candles for each fatality and ended with 17 minutes of silence to remember the dead and the wounded.  Pastor Dan Owen, after praying for all those affected by the massacre and for the apparent perpetrator, also prayed for help in ending “this insanity”, saying:

We pray because it’s become obvious to us, Father, that your children have no idea how to get out of this maze we’re in, this maze of automatic weapons in the hands of madmen, this maze of ‘I hate you because you are different from me’.  We don’t know how to change this repetitive news cycle of yet another shooting, with only the names and places changing.

Help us, we pray, to end our warring madness.  Prevent children, we pray, from bringing guns to school – and teach us how to do our part to make that happen.  Protect those who worship from future attacks – and bring people into the lives of potential attackers to stop them before they leave their homes.  We yearn, Father, for a month without seeing armed SWAT patrols on a city street, or in a school, church, synagogue, theater or hotel. And so we pray.  Hear our prayers, oh Lord.


Other vigils and services are planned to support victims’ families and the Jewish community in Pittsburgh, including one at 7 p.m., Thursday, Nov. 1  at the Ford Memorial United Methodist Church