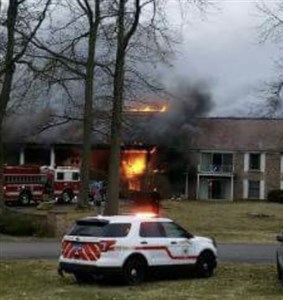 When they heard sirens and saw first responders rushing past New Virginia United Methodist Church to a fire, people gathering for their regular Faith and Fitness session immediately mobilized to offer help.

Two of them walked up to where first responders were stationed told them they were more than welcome to use the church building for anyone who needed to come inside, said Marcia Grim, an active member of the church and the Faith and Fitness group.

Hermitage Fire Chief John Flynn told the Sharon Herald newspaper that 19 people and two cats were displaced by the fire Tuesday evening, March 20 at Monticello Apartments. The church provided refuge, serving as a family reunification center as well as a place of comfort and rest.

“They came out and they opened their church,” Flynn said. “They made hot food and drinks for everybody there. They just took great care of all the people.”

Grim said the residents were mostly elderly and “some of them were in their nightclothes and didn’t have shoes or socks. The Red Cross had blankets they distributed them and set up in the sanctuary.”

The Faith and Fitness group decided to set up tables and chairs, ordered pizza, and people brought in desserts and drinks. Others brought socks and shoes and clothes. “We wanted to do whatever they needed to keep them comfortable,” Grim said.

Something really wonderful happened, though, when prayer circles formed and the people of the church, first responders and fire survivors joined in prayer for each other, giving thanks for God’s endless love and for providing safety to all involved, Grim said.

“When you put the power of God into action and let people know that they are not alone, it makes a difference,” she explained.

A lot of people were moved to tears by the prayers -- and not just those who had lost their homes.  “We just told them they were saved and they were sheltered by God’s grace.  You could see them calming down and thanking God,” Grim said.

Pre-teens work out with the Faith and Fitness group and were at the church too -- just talking with the elderly people from the apartments. “People were laughing and smiling with them in spite of the unbelievably tragic circumstances,” Grim noted.

The Rev. Mark Goswick, pastor of the New Virginia church, said the group called him from the church after they offered the building to help those fleeing the fire.  “They just said, ‘we are doing this,’” Goswick said. “I was very proud that they didn’t wait around for permission or a meeting to decide what to do!”

As Grim put it: “We are God’s people and that’s what we are called to do and be as disciples. We praise His Holy Name for guiding our hands and feet and providing us with the resources needed to help our brothers and sisters in Christ.”

The local fire chief said the building was a total loss. The Red Cross was able to find housing for all of the residents who needed it. By the next day, the church became a drop-off zone for donations. The people of the church were working with others in the community to see what things were needed in what sizes, collect gift cards and, if needed, help to transport people get necessary clothing or other items.

“In the midst of tragedy, God was present, as always, giving everyone peace, strength and comfort,” said Marcia Grim.