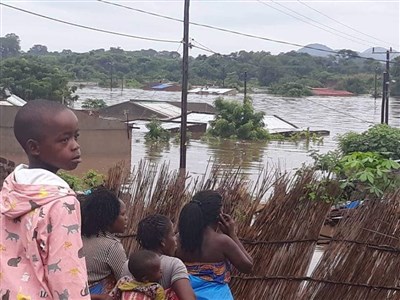 March 22 UPDATE: United Methodists are starting to respond to those affected by Cyclone Idai, which left devastation in parts of three African countries and killed 500 people, with hundreds more still missing. The United Methodist Committee on Relief has allocated three $10,000 grants for immediate, emergency short-term funding to meet basic human needs in Mozambique, Zimbabwe and Malawi. Those needs include water transportation and storage for drinking, cooking and personal and domestic hygiene, along with temporary shelter.  Read full story

In Zimbabwe, where Western PA United Methodists have built relationships through long-standing partnerships, leaders were mobilizing to assist those affected by Tropical Cyclone Idai and its accompanying rain and flooding that caused destruction in  Manicaland and Masvingo provinces in the eastern part of the country.

A March 19 situation report on Zimbabwe from the U.N. Office of Humanitarian Relief said:

At least 102 deaths and over 200 injuries have been reported, mainly in Chimanimani, and 217 people are reportedly still missing. These figures are expected to rise in the days ahead as the full extent of the damage and loss of life becomes known.

At least 923 homes have been destroyed in Chimanimani, Mutasa, Mutare, Chipinge, Buhera, Chikomba, Gutu and Bikita districts. In Chimanimani alone, eight bridges have been destroyed. In Buhera, the Marowanyati dam has overflowed and many families are displaced. People living along the Mwerahari River have been advised to be on high alert. The Tongagora refugee camp has been affected by flooding, and 49 households have been relocated within the camp.

The hardest-hit district of Chimanimani remains inaccessible, as do several wards in Chipinge district. Heavy rains have damaged roads and main access bridges have been washed away. Water supply stations have been affected...Crops and livestock have been destroyed in all affected areas, which were already facing rising food insecurity."

Thre report added, "The displacement of people, together with damaged water supply infrastructure, heightens the risk of malaria, cholera and other diarrheal diseases and the potential for a communicable disease outbreak. Government and operational partners are closely monitoring. See full report

The Rev. Duncan Charwadza, Zimbabwe East Conference deputy administrator and connectional ministries director, told UM News Service that he consulted with the Manicaland Provincial Civil Protection Unit, and “they have wholeheartedly welcomed our idea to assist as a denomination and advised accordingly a list of currently and urgently needed (items)." See UMNS story

“From the information gathered from the pastors on the ground (in) Rusitu Valley, two people lost their lives, but at the present moment it might be more than that,” said the Rev. Stephen Jeyacheya, Chimamani-Chipinge District superintendent. “A lot are missing. Among them is one of our members, the headmaster at Dzingire School.”

All the buildings at the school were destroyed, he said, as were three church members’ homes. 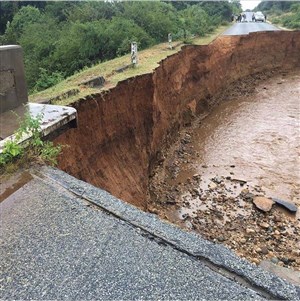 “A lot of people lost their houses and crops. All roads leading to Rusitu were destroyed. (There is) no electricity, hence no network most of the time. Accessing Mutare Town for referral patients, purchasing food for the schools and linking with the community at large is now impossible because of destroyed bridges,” he said.

“The destruction has been so bad and the church has been affected badly,” Jeyacheya said. “We are deeply in need of prayers so our God would comfort the affected families.”

“Our ambulance failed to return after ferrying a patient referred to Mutare Hospital on Saturday as the bridge was swept away,” he said.

“Most mudslides occurred in Chimanimani, but the injured could not be brought to our hospital because we have been cut off from surrounding communities by the collapsed bridges.”

The Nigerian medical missionary said Mutambara Hospital had no electricity or fuel to power generators and was unable to offer surgical procedures. The lack of electricity also affected the mortuary at the hospital and the mission had to ferry three bodies and hand over to waiting relatives at the strip, the only thing that remains of the bridge to Nhedziwa.

Charwadza, with the Zimbabwe East Conference, visited Lydia Chimonyo Girls High School in Chimanimani to assess the impact late Monday afternoon. It is the only United Methodist girls school in the Zimbabwe Episcopal Area.

“The water treatment plant at the school was damaged. This is a dire situation for the 650 pupils enrolled at the school as they are relying on water from a single borehole. There is no electricity or running water and this is stressful for the girl child,” said Charwadza.

A neighboring farmer had offered his helicopter for relief efforts, but Charwadza said the weather has not been conducive for flying.

“The girls’ school is also sheltering people from the nearby communities who were stranded and could not return home due to the damaged bridges,” he said.

Gurupira said the episcopal area is mobilizing the needed support. The health board already has donated gloves, aqua tablets, bottled water and other needed supplies for dispatch to disaster areas, he said, and Ngangu United Methodist Church has opened its church building for shelter to displaced members of the community.

“What is apparent is The United Methodist Church is being called to action as we live up to our values and offer service to society.”

In Pittsburgh, Brother's Brother Foundation, the humanitarian agency that partners with many organizations, including The Nyadire Connection, to send container shipments with medical supplies and other items to Africa and other areas of the world, has been assessing needs created by Cyclone Idai and determining the best ways to respond in both the short and long-term.  With longstanding partners such as TNC in all three affected nations (Mozambique, Zimbabwe, & Malawi), "BBF is uniquely positioned to navigate this challenging situation." Despite unstable communications in the affected areas, they have made contact with partners in both Zimbabwe and Malawi.