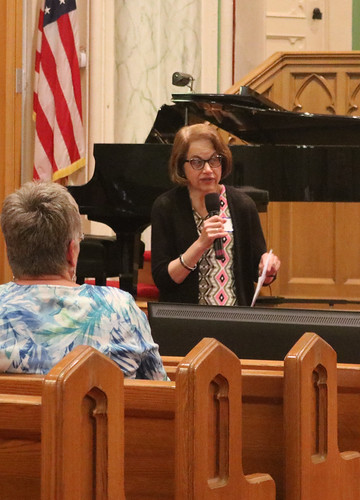 More than 125 people gathered at Butler First United Methodist Church in late June to explore how local churches can respond to those struggling with addiction in their communities. Speakers included leaders in the recovery community, certified addiction counselors, leaders from congregations partnering with those in recovery, and representatives of programs and agencies addressing addiction and prevention.

The overall message was this: The love and support of a caring Christian community can make all the difference to those struggling to overcome addiction. Several of those in the recovery community testified to this.

Janice, who was surrounded by chaos and had been heroin addict since her teens, found her way to Pastor Mark Ongley and Ashes to Life Church in Beaver Falls. “There they loved me, but I was not ready to love myself,” she said. But the people welcomed her until she found God and healing. She’s been sober for seven years, is now a wife and mother of two, a homeowner and addiction counselor -- and a leader at Ashes to Life.  The congregation offers a Celebrate Recovery program on Wednesday evenings.

A young adult from Butler area who had been abused and was introduced to drugs at age 15 eventually became an alcoholic addicted to heroin and crack.  He was disowned by his parents, but the people of Butler First Church became his family and through the Seeds of Hope program, despite a few setbacks, he has been clean 21 months.

“This church here has shown me so much love,” he said. “The women have been supporting me from Day 1. I didn’t think that the church would really want me.”  He is now an active volunteer and vital part of the media ministry.

Robin, who has been sober 28 years, was raised in a two-parent home with six children and became an addict. “I am no longer a destructive person. Addiction is a disease of feelings,” she said. “It’s between my ears..not being able to talk about what’s going on in life. But don’t give up.” She now is ordained through Petra International, is a recovery counselor and advocates for legislation supportive of the recovery community through Message Carriers of Pennsylvania.  She suggested American Addiction Centers online resource Recovery.org as a place to seek help for those who want to take control of their addiction.

Gus DiRenna said he entered drug rehab at age 50. “To this day, it has been different. I knew it was a miracle. When “two little church ladies” came to a halfway house in Central PA and invited him and some others to a Bible study, Gus said they went because it was better than doing nothing. Although one of the men tried to intimidate the women, Gus said he could see that they women weren’t afraid. Through their actions, “I have seen the power of Christian love,” he said. When Gus returned to Pittsburgh, he and his sister accepted a mailed invitation to Fairhaven UMC in Pittsburgh. He felt welcomed and for seven years has cooked and served meals there “to sick people trying to get well.”

Sue O’Brien was one of those little church ladies from Bald Eagle UMC who picked up Gus and other men from Pine Ridge Manor near Altoona several years ago -- and they have been friends since. Sue’s church is small --"187 card-carrying members; if we get 50 we’re lucky -- but we’re a caring church/a loving church and we wanted to do something in the community to share the love," she said. The church reached out to a few places in their area that served those fighting addiction or returning from prison. They asked -- and saw--what was needed. For example, they started providing suitcases because often men were released with all their possessions in a garbage bag. “What kind of message does that send to them?” Sue asked.

“You need to start by accepting people where they are and don’t hit them over the head with the Bibles,” said Sue and Gus.

Also speaking was the Rev. Dr. Jay Geisler, rector of St. Peter’s Episcopal Church in Brentwood, Canon to the Episcopal Bishop of Pittsburgh for recovery, and co-founder of the Oasis Recovery Center to help those seeking recovery from drugs and alcohol. In 2017, he opened a “Serenity House” for women in need of housing within a recovery environment.

More recently, with help from his congregation, he purchased a home formerly used as a “shooting gallery” in the struggling neighborhood of Carrick and, with Gus and the Allegheny Recovery Krew (ARK), renovated it using it to provide job training and housing for people in recovery.

Gus, director of ARK, said the goal is “to try to help these kids get up on their feet. Drugs and alcohol were never the real problem--they were a symptom of the real problem. The stigma of addiction stigma is dropped on both sides and there is fair, clean housing."  In many recovery environments, there are two to four people in one room in bunk beds, with no supervisor. “This is not going to work,” Gus said.

In their housing/job training program, all residents have full-size beds and are getting an education. Sometimes they are able to work. “You have to put your arm around them and take them, you can’t just tell them. When they think and believe they can do more, they will do more.  It’s one person helping another,” he explained.

An ARK Crew, led by a Pittsburgh chef, prepared and served a delicious restaurant-quality lunch at the event.

How Can Churches Help?

What can a church do? Some of the speakers offered these suggestions: