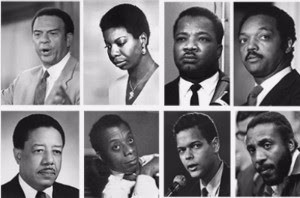 Historic audio in the United Methodist archives from Night Call, the first national call-in radio show in America when it was launched in 1965, allows current and future generations the opportunity to hear the voices of key denominational and national civil rights leaders through the website SoundTheology.org. The nightly show, which ran from 1965-69, was produced by the United Methodist Church in conjunction with the Urban League, the National Council of Churches and other faith partners.

The one-hour program, heard on scores of radio stations across the country, was live, five nights a week, giving the nation a way to hold civil discussion, listening to varying points of view, and learning how others thought and felt.

Del Shields, the host, and callers from across the country talked with Dick Gregory, Roy Innis, Jesse Jackson, and A. D. King, as well as Chester Lewis, Ralph McGill, Nina Simone, and Andrew Young. These, and others in the Civil Rights struggle of the 60s, took the opportunity to discuss the issues and their solutions with Shields and the listeners across the country.

“The greatest figures of the Civil Rights era were those who spoke and wrote the words that explained, that exhorted, that pleaded, that prayed,” said the Rev. Mike Hickcox, who formerly worked with United Methodist Communications and as a commercial radio anchor and news director.
“The UMC’s courageous and creative radio program preserved those voices, and Sound Theology is helping with digital restoration of those old audio tapes to make the prophetic voices heard again. Ralph Abernathy, Muhammad Ali, James Baldwin, and Julian Bond can be heard anytime on SoundTheology.org, the website that makes these programs available to all.”

SOUND THEOLOGY.ORG
Voices named here can be found on the Audio Programs page and on the special Civil Rights & Black History page.

Search for "Racism / Race Relations" to find 55 audio programs that focus on dealing with racism in the United States. Most are radio interviews done by "Night Call" and "Man With the Mike", another Methodist radio program.

In addition, SoundTheology.org carries 21 interviews conducted by Pamela Crosby at a 2004 reunion of persons who were part of the Central Jurisdiction of The Methodist Church. These United Methodists grew up in the separate, Black annual conferences of the church that had been established in 1939 and continued until 1968. Among those interviewed are Gilbert Caldwell, James Feree, Joseph Lowery, Mai Gray, Leontine Kelly, Walter McKelvey, Forrest Stith, and Barbara Ricks Thompson. They brought their experience and leadership from the old Central Jurisdiction into The United Methodist Church.

One program features five faculty members of Methodist Theological School in Ohio telling a 1964 class about their trip to Jackson, MS, where they attempted an failed to integrate a Methodist Church on Easter morning. “This was a significant event in the movement toward the integration of Methodist churches nationally,” Hickox said.

There are more than 1,025 audio programs available on the website – speeches, lectures, sermons, interviews, and radio programs from the Methodist Church, and from many other faith traditions. Hickox began the collection 10 years ago, when he was on staff at UMCOM. It began in collaboration with the United Methodist Commission on Archives and History, and he continued the project when he left the staff in 2010. New programs from the United Methodist archives are added every month.
News