Bishops: Oppose Gambling in Your Community 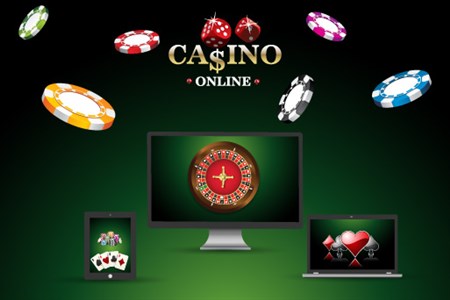 Pennsylvania’s three United Methodist bishops have signed a letter urging United Methodists who oppose expansion of gambling in their communities to contact their local government officials and request they pass a resolution banning mini-casinos within their borders. The resolutions must be submitted to the Pennsylvania Gaming Control Board by Dec. 31, 2017.

In late October, both houses of the Pennsylvania legislature passed a bill that significantly expands opportunities for gambling throughout Pennsylvania. Gov. Tom Wolf signed it into law four days later.

Gambling is a menace to society, deadly to the best interests of moral, social, economic, and spiritual life, [and] destructive of good government. . . .As an act of faith and concern, Christians should abstain from gambling and should strive to minister to those victimized by the practice. . . .Organized and commercial gambling is a threat to business, breeds crime and poverty, and is destructive to the interests of good government. It encourages the belief that work is unimportant, that money can solve all our problems, and that greed is the norm for achievement. It serves as a “regressive tax” on those with lower income. In summary, gambling is bad economics; gambling is bad public policy and gambling does not improve the quality of life." -- UMC Social Principles

It was part of a compromise designed to end a four-month state budget stalemate by bringing in revenue to offset a projected $2.2 billion deficit.

“This new law will create 10 mini-casinos in regions without a casino, allow some truck stops to operate video gaming terminals, regulate fantasy sports and online gambling, legalize online gambling portals at casinos and airports, permit the state lottery to sell tickets and offer games online, and legalize sports betting (if Congress allows it nationally),” the Bishops said in their letter.

A provision in the new law allows municipalities to opt out of this gambling expansion, but they must act before the end of 2017. Local governments may pass a resolution prohibiting a “mini-casino” within their municipal boundaries and send the resolution to the Pennsylvania Gaming Control Board by December 31, 2017.

County governments have the same option regarding truck stop gambling. Many lawmakers who voted against this legislation are recommending such action, according to the Rev. Dai Morgan, director of United Methodist Advocacy in Pennsylvania.

“As the bishops of the three United Methodist Annual Conferences in Pennsylvania, we urge our church members, clergy and conference agencies to act during this limited response period. Prayer followed by meaningful and effective action is an exercise of faith, the bishops’ letter said.

“We ask that you contact your local government leaders, as soon as possible. Ask when the next meeting will be and ask to have this mini-casino prohibition put on their agenda. Plan for residents to attend these meetings and be ready to support this resolution.”

With the new law, Pennsylvania became the first state to allow online play for commercial casinos and its state lottery. Both want to engage newer, younger players.  It joins Nevada, New Jersey and Delaware as the only four states offering online gambling. 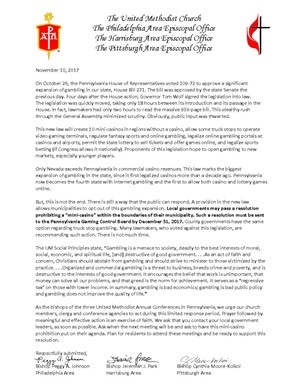 Pennsylvania casinos bring in more gross revenues than any other state except Nevada, according to the American Gaming Association. But Pennsylvania is the No. 1 state in tax revenue from the casino industry, netting $1.4 billion in the last fiscal year. Pennsylvania’s lottery brings in $1 billion in profits on $4 billion in sales, making it one of the nation’s biggest.

The 939-page gambling expansion bill was “a couple of year in the making,” according to The Associated Press, but emerged as part of a package designed to break the budget stalemate. It was passed within 18 hours in both chambers of the Legislature “despite opponents’ protests that they barely had a chance to read it.” See AP report.