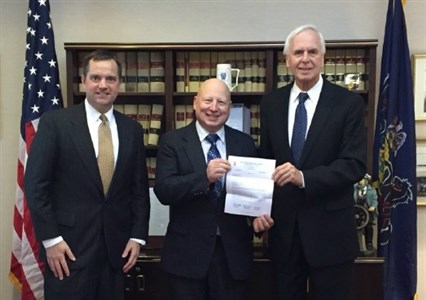 Rev. Dai Morgan, center, is shown with PA Sen. Stewart Greenleaf, right, and Patrick Cawley, executive director of the Senate Judiciary Committee.
4/11/2016
Pennsylvania's three United Methodist Bishops have endorsed legislation designed to ensure that minor children who come under the care of the state as victims of human trafficking will be managed by the Dept. of Human Services, rather than being placed in the juvenile justice system.

On Tuesday, April 5, Rev. Dai Morgan, Coordinator of United Methodist Advocacy in Pennsylvania, delivered a letter from the bishops in support of Senate Bill 851 to  Pennsylvania Senator Stewart J. Greenleaf's office at the state Capitol in Harrisburg. Sen. Greenleaf, the author of the bill, is chairman of the Senate Judiciary Committee.
SB 851 is entitled "Safe Harbor for Sexually Exploited Children." In the letter, the bishops thanked Greenleaf for sponsoring the bill and said:

"We stand firmly in opposition to human trafficking and sexual exploitation. Furthermore, when children are the victims of these crimes, we find it to be especially reprehensible.

"We would like to affirm the intention of SB 851 to develop statewide protocols to provide services and protection for child victims of human trafficking. Furthermore, we recognize the need in this bill to establish funding, law enforcement training and public awareness in support of this effort.

"We do not believe children trapped in human trafficking are criminals. Placing them in the juvenile justice system is inappropriate. This results in re-victimization. We support the bill’s intention to place such children in the care of the Department of Human Services. No system is perfect and there are likely to be failures in the child welfare system. However, over time, we would expect the Department of Human Services to provide the most satisfactory services for child victims of human trafficking."