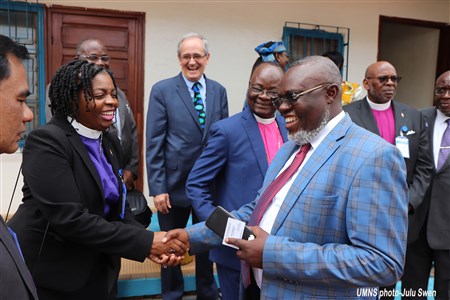 After spending time meeting with church and government leaders in Central Africa last month, Bishop Cynthia Moore-Koikoi called for a Day of Prayer for the people of the Democratic Republic of the Congo on Dec. 23, the day that had been set for a long-delayed presidential election there. On Dec. 20, the country's election commission announced that voting would be delayed until Dec. 30, 2018.

The election should lead to the country's first democratic transfer of power in 18 years. Outgoing President Joseph Kabila, 47, has governed the large, mineral-rich, sometimes violent nation since 2001. He took over after his father was assassinated.

"While in Kenya the delegation of bishops and representatives from Global Ministries and UM Communications met with the Ambassador from the Democratic Republic of the Congo," Bishop Moore-Koikoi said. "The Ambassador allowed us to pray for him and asked us to keep the DRC in prayer for a peaceful election.

"It appeared to me that in response to all that God is doing through the United Methodist Church in the DRC, the least we could do to cooperate with God’s Holy Spirit would be to mobilize our prayer resources to beseech God for peaceful elections," she explained.

Bishop Ken Carter, president of UMC Council of Bishops, on Dec. 14 issued a statement calling for prayers of peace in the DRC.

"The Democratic Republic of Congo has been one of the strongholds of United Methodism for decades and has about one tenth of all United Methodist membership with its bishops serving in major leadership roles in our global denomination," he said.

"As bishops of the church, we appeal for calmness during this time of great anxiety, and we condemn all forms of violence in the run up to the elections.  We are saddened by the deaths of those who have been killed just because they wanted to participate in this democratic process.  We extend our sympathy, acknowledge their pain and stand with all peace-loving Congolese," he added.

"As brothers and sisters in Christ who share in the Cross and the Flame, we call upon the name of Jesus Christ, who is our peace (Ephesians 2), and we search for the fruit of the Holy Spirit (Galatians 5) in these events."

During a meeting with leaders of the All Africa Conference of Churches, representing more than 120 million Christians across the continent, the six bishops on the November mission trip were told that United Methodists in conflict areas like the DRC and Central African Republic were counting on them to help bring peace.

“You have a large membership presence in the Democratic Republic of Congo and a prophetic statement from (The United Methodist Church) about ending the conflict will have greater impact,” said Dr. Bright Mawudor, deputy secretary general of the All Africa Conference.

At stops at the Philippines Embassy in Nairobi, Kenya, and the Democratic Republic of Congo Embassy in Bangui, the need for prayer was emphasized, especially for the DRC as citizens vote to choose a replacement for Kabila. The out-going president’s opponents accuse him of clinging to power by postponing elections way past his two-term constitutional limit, which ended in 2016. Kabila has said his government has been focused on putting down a rebellion in the eastern part of the country.

“We need to declare Dec. 23, 2018, a global day of prayer for the people of the Democratic Republic of Congo,” Bishop Moore-Koikoi told the delegation and the African leaders during their meeting.

In the election, voters will use semi-electronic voting machines for the first time. United Methodist Congo Central Conference leaders, with the support of the General Board of Global Ministries and General Board of Church and Society, launched a voter education campaign focused on the machines, which the leaders said could prove challenging to many Congolese who have never seen or used a computer.

Thanks to the UMC and the Independent National Electoral Commission, pastors and laypeople learned how to use the new technology through demonstrations and voting simulation.

Not everyone supports use of the new machines. Some expressed concern that they could allow vote tampering, which might lead to post-election violence such as occurred in 2006 and 2011. This report from NPR's Africa Correspondent Ofeibea Quist-Arcton was filed from Kinshasa a week before the elections after violence had broken out in some areas of the country.


The delay announced on Dec. 20 was attributed to a fire in Kinshasa a week earlier that destroyed 80 percent of the city's voting machines stored there.