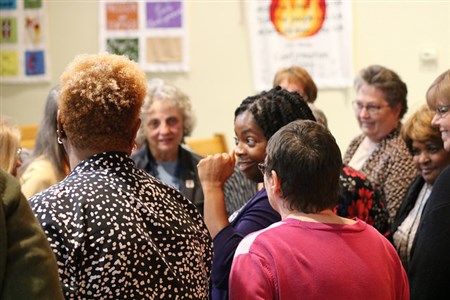 5/11/18 UPDATE: An error discovered in the ballot wording of Amendment #1 led to the May 10 announcement of a re-vote that will take place this year.

When results of denomination-wide voting on five constitutional amendments were announced on Monday, some Western PA Conference leaders offered their thoughts on the results. Two  amendments addressing gender equality failed to receive enough votes from annual conference members across the denomination to be ratified.

“My sister bishops and I are deeply grieved by these results. We weep with you and are committed to strive for a church and world that honors every person as a beloved child of God,” Bishop Cynthia Moore-Koikoi said in an email invitation to WPAUMC's active and retired women clergy to attend a discussion session at 10 a.m., Saturday, May 12. She urged them to read a letter written by the denomination’s female bishops, and endorsed unanimously by the entire Council, lamenting the results.

The Bishop also scheduled an opportunity for any laity and clergy to join in a session over lunch Saturday at annual conference at Grove City College. The tentative location is the Moreledge Room of Rathburn Hall.

At their meeting last week, the Council of Bishops (COB) canvassed vote totals reported from annual conferences over the past year. The COB released the official results Monday, May 7, along with a statement.  Five amendments received a two-thirds majority vote by the 2016 General Conference and were sent to the annual conferences for ratification votes. To be ratified, an amendment had to receive more than two-thirds (67 percent) of the aggregate total votes. Two failed by narrow margins. See vote breakdowns by annual conference here.

Amendment #1, which added language that both men and women are made in the image of God and that "we will confront and seek to eliminate discrimination against women and girls," received an aggregate vote of 66.5%, falling by less than 100 votes.
UPDATE: Because of an error in wording, the secretary of the General Conference announced a re-vote on this amendment by the annual conferences to begin this year.

Amendment #2, which added this language, “… nor shall any member be denied access to an equal place in the life, worship, and governance of the Church because of race, color, gender, national origin, ability, age, marital status, or economic condition,” received an aggregate vote of 61.3%.

Connellsville District Supt. Bob Zilhaver, who had worked with leaders of the Commission on the Status and Role of Women since 2008 on crafting and moving Amendment #2 through the legislative process, also expressed disappointment in the vote results, but said the effort will continue. He currently serves on the COSROW executive board.

In an email to Zilhaver and other supporters, COSROW General Secretary Dawn Wiggins Hare said, “These results hurt our hearts and today we grieve.  Our work is not finished, and I pray that each of us will find renewal of hearts and energy and spirit to finish the race put before us.

"We are grateful for the leadership of Bishop Tracy Smith Malone, our president, and for that of the female bishops of The United Methodist Church.  We also give thanks for the male bishops who stood in solidarity with them.  We give thanks for each of you, too.  The critical importance of your willingness to serve alongside us in our work at The General Commission on the Status and Role of Women cannot be understated...”     Read COSROW's official response to the vote results.

Zilhaver said one of the things that may have influenced those who voted against Amendment #2 was additional language that was added to the original proposed legislation, which addressed only gender and racial equity. As it moved through the process, language was added to include age, ability, and marital status. “That caused it not to be as clear” for those voting on it, he said.

Zilhaver also worked with others in Western PA in drafting Amendment #5. It adds language to Paragraph 50 regarding how the Council of Bishops holds its individual members accountable for their work. As ratified, the amendment adds the following sentence to the end of Paragraph 50: "These provisions shall not preclude that adoption by the General Conference of provisions for the Council of Bishops to hold its individual members accountable for their work, both as general superintendents and as presidents and residents in episcopal areas."

The Western Pennsylvania Conference submitted the amendment to supersede a 1980 ruling by the Judicial Council which held that it was unconstitutional for the Council of Bishops to hold its members accountable. In 2012, prompted by questions raised by Nancy DeNardo and others from WPAUMC, the denomination’s General Council on Finance and Administration and Board of Global Ministries filed a complaint against East Africa Area Bishop Daniel Wandabula stemming from three unfavorable audits. That complaint is still unresolved.

The amendment only enables General Conference to pass legislation, and Zilhaver noted that the denomination’s lawmaking body already did that in 2016.

The revised Paragraph 413.3 in the Book of Discipline sets a definitive timeline of 180 days for a college of bishops to resolve or refer a complaint. If that doesn’t happen, the paragraph says the matter moves to the Council of Bishops, which then selects a panel from their number to adjudicate the matter. If the bishop under complaint is from the U.S., the panel has five bishops — one from each jurisdiction. If the bishop is from Africa, Asia or Europe, the panel has three bishops — one from each continent.

The paragraph also now allows the Council of Bishops — at any time in the complaint process, including after a just resolution — to remove a complaint from a college of bishops by a two-thirds vote.

To read more about the amendments, see the Council of Bishops press release.