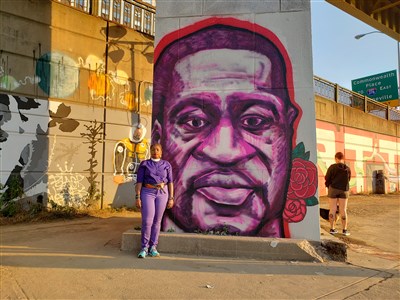 Following the return of three guilty verdicts in the trial of former Minneapolis police officer Derek Chauvin for the murder of George Floyd, Bishop Cynthia Moore-Koikoi shared her personal response as a black woman. She then called on all Christians to "work to bring an end to the racism, bias, abuse of power, and lack of empathy and compassion that continue to lead to the murder of black and brown people across our beloved nation. It is our Christian duty to work for justice," she said.

Here is the Bishop's full statement and a prayer.

Learn to do right; seek justice.
Defend the oppressed.
Take up the cause of the fatherless;
Plead the case of the widow.        (Isaiah 1:17 NIV)

As a black woman with black brothers and sisters, black nieces and nephews, black aunts and uncles, and black cousins, the conviction of Derek Chauvin feels personal. It elicits a host of emotions. Unlike some, I find no joy in the murder conviction of Derek Chauvin.  I remain profoundly sad that Gianna Floyd will live the rest of her life knowing that a police officer murdered her father.  I remain angry that a police officer became so intoxicated with power and his own bias that he continually knelt on Mr. Floyd’s neck until Mr. Floyd’s life slipped away under the weight of his knee.

I am relieved that the criminal justice system has held Derek Chauvin accountable for murdering Mr. Floyd.  The prosecutors, judge, police officers who testified against Derek Chauvin, and the jury have helped me to believe that to them, my life and the lives of all of my black relatives matter. For that I am exceedingly grateful.

Thank you for receiving from a black woman this very personal response to the verdict.

As a black woman who has black relatives, I am asking that the church stand up and act in a way that demonstrates that I matter.  I am asking for the church to act so that some day bishops will not have to write any more letters about protests, trials, or verdicts that have come about someone who was sworn to protect and defend has murdered someone who looks like me.

“We commit as the Church to move beyond symbolic expressions and representative models that do not challenge unjust systems of power and access.”

A prayer for the verdict:

Almighty God, we thank you for the men and women who faithfully carried out their duties as citizens in order to render a verdict in this trial.  We lift before you the entire Floyd family, asking you to surround them with your peace.  We pray for Derek Chauvin and his family, asking that you reveal your transformative presence to them as they walk through the coming weeks.  We pray for unity and understanding in our country and action in our church.  In Jesus name. Amen