Bishop Moore-Koikoi: God is in Control 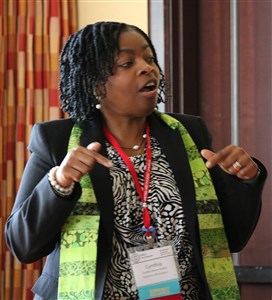 An installation service for Bishop Cynthia Moore-Koikoi has been scheduled for 2 p.m., Saturday, Oct. 22, 2016 at the Crossfire Campus of Butler First United Methodist Church. The campus is located at 1802 N. Main St. Ext., Butler, PA.
7/19/2016

New United Methodist Bishop Cynthia Moore-Koikoi “can’t wait to see how God is going to work in and through and among us,” she told Western Pennsylvania delegates and leaders shortly after being assigned to serve in the Pittsburgh Area. She began her new assignment on September 1, the same day Bishop Thomas J. Bickerton became bishop of the New York Area.

The daughter of a United Methodist pastor who served 40 years in ministry in the Baltimore-Washington Conference, Bishop Moore-Koikoi said that as a bishop she is committed to work toward a "vision of a diverse church that embraces justice and the life-saving love of Christ."

She acknowledges that it won’t be easy, but said, “I remind myself that God has got this. God is in control. My role and the church’s role is to experience the reign of God here on earth and point that out to people.”

Acknowledging deep divisions in the denomination around human sexuality issues, she said that after being notified of her assignment, “God said to me: “Cynthia, you’ve been talking about this.  We have an opportunity to show the world what unity really looks like.  You asked for this.’

“I know there are folks in the room who are diametrically opposed to what I believe about this issue,” she added. “But we have an opportunity to show the world what it might look like for brothers and sisters to dwell together in unity. And it is going to be that witness that claims souls for Jesus the Christ!

“We won’t have to say a word about who God is,” she pointed out.  “Seeing us working together….is going to say something about who God is. And there are going to be people who will say,  ‘If they can do it, they must have something inside of them that is greater than what is outside in that world.  And I want to find out about that!’

On Wednesday night, July 13, Moore-Koikoi became just the second African-American woman to be elected a Bishop in the Northeastern Jurisdiction (NEJ), receiving 64 percent of the vote on the 11th ballot.  Another African-American woman, LaTrelle Miller Easterling of the New England Conference, was elected the following morning after several other candidates withdrew from the process.

Moore-Koikoi is familiar with church life and ministry in rural, urban and suburban settings. Growing up in a preacher’s family, she said, “you experience about every kind of church you can serve.  When she was in elementary school, her father served a rural church “on the top of a very, very long hill, and in the back yard was a cemetery. Beside the church property was a farm with cows that would frequently get out and we would have to call up to the farm and ask them to come and round up their herd. “

Later, her father served a church in suburban Silver Spring, MD, where she went to junior high and high school.

Ordained an elder in 2010, she served on the Conference staff working with churches on discipleship. She later served as district superintendent for the Greater Washington Area, and most recently as superintendent of the Baltimore Metropolitan District.

In that role, she played a pivotal spiritual role in the city following the unrest in 2015 after the death of Freddie Gray in police custody. She helped to organize United Methodist Churches to open their doors and minister to children and families whose schools were closed, and to meet other basic needs. She became the face of the United Methodist Church, and church volunteers in red T-shirts were visible praying for and ministering to the neighborhoods. Read her commentary Is Baltimore rising a year after Freddie Gray's death?
Bishop Moore Koikoi answered her call to ministry while a member of Sharp Street Memorial UMC in Baltimore, her great-grandfather’s church and the church which sent her father into ministry. Her husband of three years, the Rev. Raphael Koikoi, currently serves as pastor there.

“We are in an area where people struggle daily…to feed their children,” Pastor Raphael Koikoi told the Western Pennsylvania group. “We are in one of the five zip codes where we fund the prison system. In other words, the majority of people who are in prison in Maryland come from one of those five zip codes. My heart is with youth ministry; my heart is with the marginalized, the disenfranchised.”

“I love painting stuff, building stuff. I love doing that with youth because they have that work-play balance.  They know how to do the fellowship stuff while they do the building stuff. Sometimes the adults get so focused on finishing the project that we forget that it's important to just stop and be with each other. So youth help us get that right,” she said.

Standing at the podium of the NEJ Conference after her election, she said the being elected Bishop is a sacred trust.  “I’m going to need your prayers so that I can fulfill that trust,” she said. “…God spoke through you tonight, and that’s going to continue.”

The newly elected Bishop said she once sang in a group called Tapestry.  “Sometimes, God took all of the single chords and wove them together into something spectacular,” she said. “We need to show the world that God is more than just a good and beautiful God; God is a spectacular God.”

In overseeing the work of the church, "working prophetically, evangelically and apostolically with all," she said bishops must "leave space for the transforming movement of the Holy Spirit, especially at this time, when the denomination is divided and many people may be wondering about what the future might hold.

“That’s spiritual work — remembering who God is and who God has called us to be,” she said. “We got God, so we got this.”