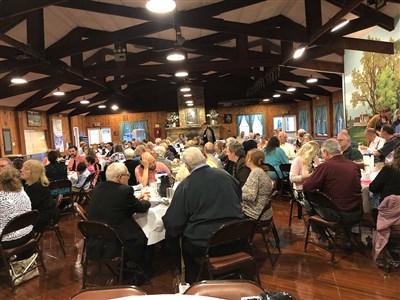 Nearly 200 people turned out for the annual Jumonville Spring Dinner on Sunday, May 5 where Larry and Jaye Beatty, who officially retired March 31, were honored for their 37 years of service and leadership. As President of Jumonville, Larry shepherded its growth from a popular camp to a year-round camping and retreat center and Jaye filled many roles, most recently public relations coordinator, that aided that growth.


The Beatty’s legacy at Jumonville reaches beyond the mountaintop in countless ways. The thousands of summer campers who have been richly blessed by Larry’s constant devotion to God’s calling,a nationally-recognized program, cutting-edge uses of technology, and thoughtful facility management are just a few of the ways Larry’s ministry will be remembered. The innovation around the adventure program set the standard for the combination of Christ-centered curriculum and exciting activities, which continues to inspire similar programs around the country.

As Rev. Joe Martin, a long time camp dean who admitted to breaking some camp rules from time to time, put it in his reflections: "Larry, I can honestly say that you were ultimately responsible for our deaning successes at camp. Your leadership, the freedom you offered to build and develop camping ideas and programs, the ideals and ideas that you brought to Jumonville changed this place for the better.  You poured your heart and soul into this place in every way."

Rev. John Seth, who described Jaye Beatty as "a Martha in perpetual motion," highlighted the many gifts Jaye shared at Jumonville and beyond, including her hospitality, support of Larry, her wide-ranging prayer ministry, her liturgical dance ministry --and her skill with tools.

Other speakers included: After the event, Jessica Gamache, WPAUMC Camping and Retreat Ministries Coordinator, said said: “It was wonderful to see so many come to show their appreciation for Larry and Jaye and for their dedication to sharing the grace of Christ with campers, guests and visitors."

Video of the presentations is available on Jumonville's Facebook page https://www.facebook.com/JvilleCamp/