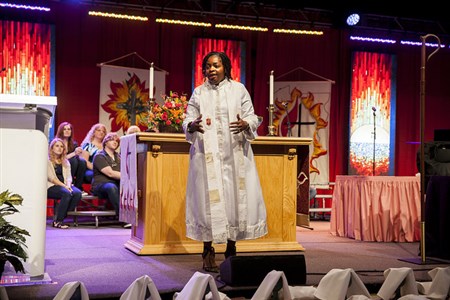 Bishop Cynthia Moore-Koikoi, presiding at her first Western Pennsylvania Annual Conference session June 8-11, 2017,  told the 1250 clergy and laity gathered at Grove City College to put aside their anxiety, fear and disagreements and declared the campus “A Love Zone.” The annual conference theme was WPA Chic: Dressed in Love, taken from Colossians 3:12-17.

“If you’ve come here ready for a fight, you are totally out of order!” she said, adding that anxiety and fear are an addiction in our denomination and society today. The Bishop invited those who needed to indulge those addictions to take a break, “but you must go off-campus to do it!”

“If we are going to do the work that God has called us to do…we have to be dressed in love. It is our love that is going to give us the power we need to work in harmony with one another… the wisdom that we need to discern God’s will," she said.

During a Saturday morning session, Bishop Moore-Koikoi literally took a leap of faith, climbed over a balcony and dropped on a rope onto the plenary room floor.  It was a dramatic prelude to a presentation and her announcement of a four-year initiative to raise $5 million for camping and retreat ministries.

The announcement brought people to their feet and many spontaneously walked forward to drop gifts onto the stage at her feet. The total given was $9,251. The following day a previously announced offering for camping and retreat ministries brought in an additional $9,171 for a total of $18,422. Gifts from youth at a pizza party with the bishop added $1,985 to the total.

The Conference honored 28 retiring clergy members with a combined total of 665 years of service.

State of the Church

In her State of the Church address, Bishop Moore-Koikoi recounted what she learned as she traveled to all of the districts to meet with laity and clergy since arriving in Western PA  September 1. She was awed by the beauty and by the work of the various mission agencies that are making a difference in people's lives. She heard about miraculous life transformations that have taken place at camps, and was encouraged by interacting with young people at SPARK and during confirmation class visits to the Conference Center.

Through it all, she said she was continually reminded to the lyrics to How Great Thou Art and We Are Blessed.

She said that there’s a need to better communicate what the Conference staff can do to resource and support local churches. To address concerns about ineffective or mediocre pastors, for example, Rev. Susan Moudry, is responsible for “providing opportunities and support for clergy so that they  can be the pastors they dreamed they would be when God called them.”  The Bishop said she has asked Moudry to work with Conference Lay Leader Sharon Gregory to help equip laity for their leadership roles.

“Many clergy and laity asked for help in making disciples,” Bishop Moore-Koikoi said. “There is an acknowledgement that even Western Pennsylvania culture has changed a little since 1950.  The way we used to make disciples isn't working any more.  Most people I have talked with have expressed a desire to do things differently, but they just don’t know what to do.”

She specifically mentioned the Rev. Amy Wagner, director of congregational development and revitalization, and the Rev. Chris Kindle, director of discipleship, as staff member who can provide help to local churches.

Bishop Moore-Koikoi said many people expressed concerns about racism and sexism in the annual conference and wanted to find ways to address it.  “This is going to take hard, uncomfortable, even painful work. ..We are going to have to have some hard conversations about what true hospitality looks like.  Having a black bishop is not going to end racism and lead to greater racial diversity in this annual conference.  Having a female bishop is not going to end sexism in this annual conference. It is going to take all of us making a decision that we are going to open ourselves up to examination by God and to act on what God reveals to us.” She recommended that churches contact the Rev. Dianne Glave, coordinator of diversity development, for help.

Addressing divisions in the denomination in a later presentation about the work of the Council of Bishops’ Commission on The Way Forward, Bishop Moore-Koikoi outlined her vision for the Annual Conference Order of Elders facilitating conversations among the diverse voices represented in Western Pennsylvania and ensuring that those views are being heard by the Commission. She shared her optimism that God has already worked out a way forward. God is simply waiting for us to follow the plan.

Rev. Dr. Dawn Chesser, of UMC Discipleship Ministries, lead the Conference in Bible study on Friday and Saturday mornings, focusing on the first three chapters of Colossians. In keeping with the theme of being “Dressed in Love, she told about her grandmother, a woman who “wore her faith like a beautiful garment.” She noted that “we are living in a time when division seems easier and connections more fragile” and that as Christians we have responsibilities to God and our communities.

Rev. Chesser and the Rev. Dr. L. Roger Owens were the teachers for Leadership Day classes for laity and clergy. The Worship Wardrobe, with Dr.  Chesser, dealt with the foundational pattern of the worship service, exploring how worship clothes us for God’s loving mission to the world. Participants will also consider how to form a worship team and how this model of worship planning adds flair and style to our worship of God. Dr. Owens session,entitled Spiritual Leadership for Everyone (Yes, Even You!), explored ways that anyone—pastors, committee chairs, parents, and other leaders—can practice spiritual leadership wherever they are.

In legislative action, conference members approved a $9.74 million connectional apportionment budget for ministry in 2018 with little debate. In reports to the annual conference, leaders explained the ministries funded by the apportionment budget and distributed a list of grants from the budget to fund ministry initiatives of local churches and agencies.
Several special Sundays with offerings were approved, as well as legislation calling for support of legislation mandating recording of juvenile interrogations in Pennsylvania. Rev. Christine Rogan was approved as a full-time General Evangelist, the Rev. John Zimmerman was approved as a General Evangelist and Luella Kreiger was approved as a Conference Evangelist.

Bishop Moore-Koikoi ruled two petitions out of order: P 307 -- “A Limitation on Conference and District Boards of Ordained Ministry Policies” -- called for the Western PA Annual Conference to express its opinion to boards of ordained ministry in other annual conferences on matters related to evaluating fitness for ministry; and P 611 --A Petition Against Actions of Non-Conformity--seeking to have the Western PA Annual Conference register its disagreement with legislation approved by the 2016 Northeastern Jurisdictional Conference encouraging its member annual conferences not to conform to sections of the Book of Discipline viewed as discriminatory against LGBQT persons.

The Bishop said that she could have ruled both petitions out of order before they went to the legislative section, but instead invited the petitioners into conversation to see if there might be a way to achieve their goals that would be within the confines of the role of the annual conference. The petitions were discussed in legislative sections, and “while they were not able to work out differences, the conversations were done in love. I want to thank you for that…Praise God! At the end of the day, I ruled them out of order,” the Bishop said. The petitioners asked that the actions be appealed to the Judicial Council and the Bishop said that will happen automatically. “This is what we do as United Methodists and we do it in love. God’s spirit is in this process,”  she explained.

President Pastor Ruben Asunción Zeledon of the Methodist Church of Nicaragua and his wife Maryuris were welcomed to the annual conference. Pastor Reuben, with Rebecca Clapp translating, expressed his faith and hope for the future of the church in Nicaragua. He was introduced by Richard Schall of the Conference Nicaragua Partnership and the Rev. David Stains, whose support of the church in Nicaragua has such a long history that his colleagues claimed there is a picture of him hanging every church there.

Conference Program staff, wearing red Staff t-shirts, offered There's a Staff for That , a presentation to let local church leaders know the many ways that staff members can assist local churches in such things as discipleship, discussing racism and implicit bias, mission involvement, and reaching out to their communities.

The Conference received certificates of appreciation for supporting General Conference apportionments at 100%.

The Conference Poverty announced its initiative to encourage all congregations to engage in n some kind of ministry with the poor. Currently approximately 300 of the nearly 800 congregations report involvement in ministries to alleviate the effects of poverty or help individuals break the cycle of poverty.

Before the opening worship a new Laity Session was held, with a focus on disciple-making through the H.O.P.E. process of engaging the community and reaching new people. It also included a segment on the legislative process and responsibilities of serving as a voting member.

As the annual conference got underway, people brought UMCOR kits and used shoes from their local churches to support mission work. Katie Peterson, a deaconess and director of the Eastbrook Mission Barn reported that 75 groups delivered 1350 UMCOR kits to the Barn’s collection station.  Meanwhile, All God’s Children Ministries and the Erie UM Alliance packed a large truck-trailer with an estimated 27,000 pairs of gently used donated shoes to support their ministries and fuel micro-enterprise in developing nations.

Awards, which were presented in recipients' local churches, were acknowledged with a handout and Powerpoint presentations during annual conference. Award winners included:  See Annual Conference photo collections at flickr.com/photos/wpaumc/collections/72157704460757952/