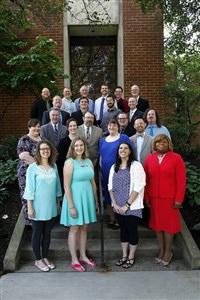 The 2016 Western Pennsylvania Annual Conference, held June 9-12 at Grove City College, focused on practical ways for those on the Road to Discipleship to reach out and engage new people in new places. Highlights included the teaching of the Rev. Adam Hamilton, commissioning and ordination of new clergy, and celebrations of Bishop Thomas J. Bickerton’s leadership over the past 12 years.

Twenty-two women and men were commissioned and received as provisional members. Eight were ordained as elders and one associate member was received.


“This is the largest group of provisional members that I have commissioned. It’s also one of the youngest groups,” Bishop Bickerton said at the Saturday morning commissioning service for provisional members. “The Western Pennsylvania Annual Conference is all of a sudden leading the way with young clergy!

“The reason for that is there has been a culture of call developed here,” he said.   “There has been a convergence of efforts . . .the camping program, the Board of Ordained Ministry, and people in the local churches with a depth of spirit who are unafraid to approach someone and say that they believe God is calling them into ministry.  I have to say that before I recognized my own call to ministry someone in the church saw it first and told me.”

The founding pastor who led the United Methodist Church of the Ressurection in Leawood, Kansas, from a handful of people in 1990 to a congregation of more than 20,000, Rev. Adam Hamilton’s sessions on Friday morning focused on effective church leadership, including the role of a leader, how leadership and management differ and the practices of effective leaders. in the afternoon, he gave insight into effective preaching, how to prepare sermons and plan ahead to address topics that relate to people's perceived needs. The final session focused on strategies for reaching the unchurched and how to improve the church’s witness in the community. Through it all were practical tips that could be used in churches and communities of any size.

“The approach the generation coming up is most likely to respond to is the Wesleyan approach to the Gospel,” Hamilton said. He explained that young adults are looking for authenticity and for opportunities to make a difference, to put beliefs into action and be part of something greater than themselves.

Leaders, Hamilton said, set the tone for the organization. Their role is not to manage, but to inspire and lead. Churches should regularly conduct 360 evaluations and see how to improve.  "Leaders don’t give up,” if something doesn’t work.  But church leaders must “change, innovate, improve or die.”

It’s important for leaders to know and show their people know what a disciple looks like, then figure out how we are going to help them get there, Hamilton said.  “Be willing to do whatever it takes to accommodate needs.”

Hamilton offered five ways to connect with people through preaching: “There is power in preaching when you get out of the way and let God work,” he said.

To reach the unchurched, Hamilton said, “You have to figure out what is beautiful about this church – not just the United Methodist Church, your church. .. Leaders need to be able to say to everyone, ‘This is what I love about our church.’”

In his final session, he said, “If your church exists to be the body of Christ, it seeks to reach the least and the lost,” he said. After telling a story of one young woman who now is part of the Church of the Resurrection, he asked, “Are you still the church that will accept a divorced, single mom, barmaid who is leaving Wicca? Because if not, then I don't know if I want to be a part of this church anymore.”

On Wednesday, June 8, the Day of Preparation, about 140 clergy and laity attended From Membership to Discipleship, a two-session workshop led by Dr. Phil Maynard. They came to learn more about the discipleship process and said the workshop offered many practical take-a-ways to bring back into their local churches.  “Our ongoing hope and prayer is that some of these ideas will be incorporated into our churches, strengthening them and leading to lasting impact being made in our communities,” said the Rev. Susan Moudry, who organized the workshop sessions.

In both the opening worship service and his State of the Church address, Bishop Bickerton talked about the discord and divisions in politics, the church and the world. During opening worship, he offered familiar words from the prophet Micah to help point The Way Through these turbulent times: “Do justice; Love kindness and Walk Humbly with our God.”

In the State of the Church address, he noted that those on the extremes are calling for a split in the denomination. He called on any present who are working toward a separation to  stop and instead work with him and others “to preserve our greatest witness – an outward expression of an inward and deeply spiritual grace that honors our diversity, loves all of God’s created children equally, and longs for unity at all costs in the body of Christ!”

“Our role is to lead the church in times of worship, study, discernment, confession and prayer for God’s guidance rather than our own,” he said.  “We must preach, teach, and live as a demonstration of the unity that is only possible through Jesus Christ our Lord and the power of the Holy Spirit in our midst!”

Members of the annual conference approved a connectional apportionment budget of $9.68 million for 2017, but voted to refer a proposed amendment  to reduce the base percentage for calculating apportionments, and cutting the budget accordingly, to the Council on Finance and Administration for a report for the 2018 budget. An additional action charged the Connectional Leadership Team, in consultation with the Personnel Committee, to complete a comprehensive study of the Conference staffing structure to address it efficacy, sustainability and utilization of the staff and Cabinet members’ gifts to benefit the local church.

Members supported calling on Pennsylvania elected officials to reform the ways political campaigns are financed in the state, to require full disclosure of contributors and reduce the “undue influence of money in our political process or social system.”  Additional legislation directed leaders to call on elected officials to eliminate gerrymandering in the way legislative and Congressional districts are drawn.

After an energizing Star War’s-themed battle in which light-saber wielding creatures of “The Light Side” defeated The Dark Side, the Youth Ministry Team, an integral part of annual conference serving as pages and voting members, presented the Youth Worker of the Year Award to a team from California First UMC -- Tosha and Joel Crawford and Marty Liberatore. They’ve launched and grown an active youth group in less than three years.  The YMT’s Pineapple Award for an individual or group who goes out of their way to assist YMT efforts went to the Seward UMC for helping work teams.

The youth closed out their presentation with a special parting gift for Bishop Bickerton – a Chewbacca mask like the one featured in a viral YouTube video.

Revs. Scott Gallagher and Justin Judy were presented with a Golden Sneaker award for their 500-mile walking journey to Annual Conference.

Rev. Al Kimmel of the Evangelism Team announced this year’s recipients of the Denman Awards, which recognize outstanding work in the area of evangelism. Bill Hebenthal, the Recovery Ministry Leader at the new Connect Church in Blairsville, received the laity award and the Rev. Dr. David Stains received the clergy award. Stains efforts include teaching Disciple Bible Study in Spanish to inmates at correctional institutions and years of mission work and leadership in the Encounter with Christ in Latin America and the Caribbean. He worked with the late Dory Heckman to translate the Disciple series into Spanish.

Bishop Bickerton was honored with an original song by the Rev. Eric and Tara Park, testimony by leaders who had worked with him, a video retrospective of his years in Western Pennsylvania, and a donation of $75,638.51 in his honor for the Imagine No Malaria/Global Health campaign. Episcopacy Chair Matthew Judd noted that, including the $2,000 given earlier by the Youth Ministry Team, the Conference has contributed a total of $2,126,158.90 to reduce deaths from malaria.

At the conclusion of the Sunday Ordination Service, Bishop Bickerton removed his clerical robe, stole and cross, put them on a hanger and rolled up his shirt sleeves. When he first arrived in Western Pennsylvania, he did something similar.

“I talked about work we had to do that was yet to be discovered and I talked about offering them Christ. I said let’s roll up our sleeves and get about the work that God has called us to do,” he said.

Before striding off the stage on June 12, he echoed that call, saying, “Roll up your sleeves and get about spreading scriptural holiness across Western Pennsylvania. . . .Get out of here and get it done!”


Photos and additional information are available through the links at wpaumc.org/dailyproceedings
Other photos can be seen at revrichpearson.com.