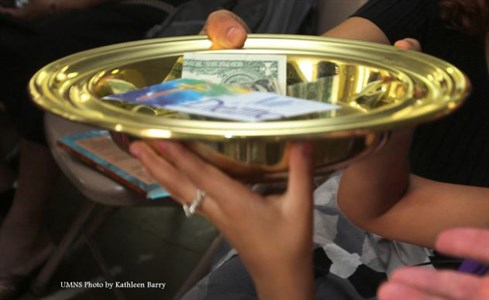 Western Pennsylvania is among 25 of 57 annual conferences in the U. S. that paid 100 percent of their apportionments to support United Methodist Church connectional ministry throughout the world.

If The United Methodist Church had a “Paid in Full” rubber stamp, it would likely need more ink.

That’s because — looking at recent  years at least — a record number of conferences have paid 100 percent of their apportionments, part of an overall bright picture in denominational giving.

In 2014, 25 of 57 U.S. annual conferences paid full apportionments to support the national and international ministries of the general church. That number is up from 20 in both 2012 and 2013, and it’s the highest number in at least 10 years — the period of time for which the General Council on Finance and Administration, the denomination’s finance agency, has ready records.

The previous high was in 2007 when 23 conferences paid in full — just before the world economic crisis. At the time, the denomination had more than 60 conferences in the United States.

“I characterize this as very, very good news,” said Charlie Moore, a member of the finance agency’s board. He is chair of the board’s committee on General Agency and Episcopal Matters and a member of Community United Methodist Church in Crofton, Maryland. The Baltimore-Washington Conference, where he serves on the finance committee, is maintaining its tradition of paying 100 percent.

“I think it is a reflection of the recovering economy, but I also think it’s evidence of the continuing commitment on the part of the people in the pews and annual conference leadership to support the connection.”

Apportionments are the share each conference or local church pays to support international, national and regional missions. At the general church level, the money supports bishops, United Methodist ministerial education, most general agencies and denomination-wide efforts such as the Black College Fund and Africa University in Zimbabwe. The offering also pays for the work of United Methodist News Service.

The giving begins at the local church.

Hand Memorial United Methodist Church in Pelham, Georgia, is among 10 South Georgia Conference churches that for the first time in years paid their full apportionments. The 161-member church last fully contributed in 2010.

The Rev. Carrie Myers, the church’s pastor, said re-educating the congregation on where the money goes — such as helping young pastors attend seminary — was a catalyst to more giving.

“We have recognized the overall ministry that can be done through apportionments because we can do more collectively across the globe than we can do as an individual church,” she said.

The church met its apportionments without shortchanging its local ministries, she added.

“We just had to remind ourselves that giving is important and God calls us to do that, and he calls us to give to more than the operating of the church budget.”

The number of conferences in the 100 percent club is not the only positive sign.

Preliminary figures from the General Council on Finance and Administration show 2014 United Methodist giving to support the denomination is up almost across the board.

The denomination's budget for general funds is based on the assumption that 86 percent of apportionments will be collected.

In 2014, giving also grew for five of the six Special Sundays — special offerings scheduled throughout the year to support various ministries of the church.

The surge in giving comes as United Methodist membership and attendance in U.S. continues a decades-long-decline. However, Moore points out, those figures don’t tell the story of United Methodist generosity.

He added: “I always characterize it that our church really doesn’t have a stewardship problem as much as it has an attendance problem. The stewardship amongst those who are still with us is still very significant, very positive.”

The United Methodist Church in fact is growing with now an estimated 12.8 million members worldwide.

U.S. United Methodists, at this point, bear the lion’s share of general church expenses. But that could change soon.

Church leaders, including bishops, in Africa, Europe and the Philippines have made it a goal to contribute more to the denomination’s global ministries. The General Council on Finance and Administration board is working with those leaders to develop an apportionment formula for conferences outside the United States that it will propose to the 2016 General Conference.

Every conference in Africa, Europe and the Philippines already contributes at least 10 percent of its bishop’s office expenses. Some pay as much as 80 percent. There are 76 conferences outside the United States.

The finance agency requests apportionments from each U.S. conference based on a formula that includes its local church expenditures, local church costs, the economic strength of the conference, and a base percentage approved by General Conference.

At the conference level

The increased giving at the general church level reflects the commitment on the part of conferences to the United Methodist connection.

“There is a lot of discussion among treasurers of the importance of paying apportionments at 100 percent,” said the Rev. Jodi Smith, the North Texas Conference’s director of the center for connectional resources. She is this year’s president of the National Association of Annual Conference Treasurers.

The Rocky Mountain Conference paid its full apportionments for the first time since 1976. The conference encompasses United Methodists in Colorado, Utah and parts of Wyoming.

Noreen Keleshian, conference treasurer and benefits officer, said the conference asks local churches to give 13 percent of their incomes, adjusted for such things as payments to endowment funds. Usually, about half of the churches pay that percentage, Keleshian said.

The conference also budgets to pay 95 percent of its general church apportionments. But meeting that goal depends largely on the vagaries of local church finances.

“If the churches have a bad year,” she said, “we don’t get as much money.”

In 2014, many Rocky Mountain churches clearly had a good year. Revenue came in at about $115,000 higher than the conference had budgeted, and expenses ended up lower. When the conference’s finance council met in December, it decided immediately to use the surplus to pay its apportionments in full.

Now that it has done so, the Rocky Mountain Conference’s Bishop Elaine Stanovsky is pushing the conference to continue contributing the full amount.

Keleshian is sharing the news around the conference.

“Whenever I say, ‘With your help — with the generosity of the churches in the conference — we paid our apportionments at 100 percent,’ you can hear an audible gasp and then everybody claps,” she said. “It’s important for our solid churches that do pay to hear that we’ve met our commitment.”