Instead of a traditional Ash Wednesday service, leaders at Park UMC in North East opted for a brief devotion followed by a few hours spent packing meals for Stop Hunger Now, an international hunger relief organization.  The event drew about 150 volunteers from the church and community and fit in with Park’s efforts to put faith into action. 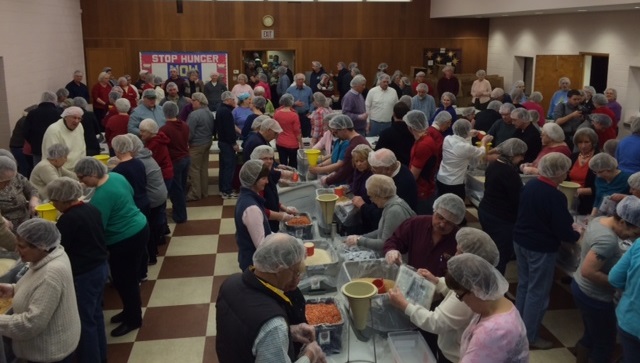 Past Ash Wednesday evening services would draw 40 people at most, said Pam Whitmore, accountability chair at Park. “In comparison, this was outstanding!   Every one I have spoken to from church and community is excited to have been a part of it.  Many are excited to do it again.”

One community volunteer wrote on Facebook about how moved she was by Pastor Mark Hecht’s short message prior to the start of the meal-packing, Whitmore added.

The volunteers included about 40 Boy Scouts from the troop that meets at the church and 25 people from a community group that uses the facility. Some others came in response to invitations issued through stories in Erie and North East newspapers.

Rick King, the church’s missions chair, organized the event. He and others suggested it after the Stop Hunger Now effort at the 2013 Western PA Annual Conference session.

Although the church budgeted $7500 from its funds for the project, donations from members covered the cost.
In Stop Hunger Now’s assembly lines, volunteers combine rice, soy, dehydrated vegetables and a flavoring mix including 21 essential vitamins and minerals into small meal packets.  Each meal costs only 25 cents.  The food stores easily, has a shelf-life of two years and is easy to transport.

The of the meals are distributed through school feeding programs, orphanages, and medical clinics around the world. About 10 percent of the packages go  to the those in crisis situations.

See photos from the Erie Times-News