Of all the misfortunes that could befall a Jewish congregation, the one that recently visited Congregation B'nai Abraham in Butler, PA was especially painful.

The Torah scrolls — the Butler synagogue's most cherished and most holy items — got wet.

Cantor Michal Gray-Schaffer, the spiritual leader, discovered the damage during shabbat — the sabbath service — on Jan. 10 when she pulled one of five scrolls from the tabernacle to read a passage from Exodus. 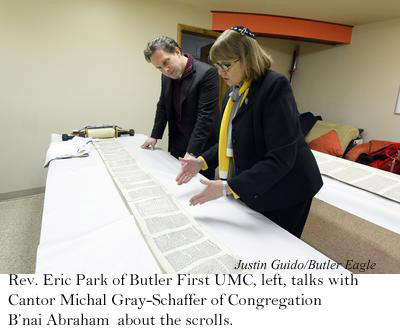 The fabric covering was damp to the touch. So was the hand-lettered parchment rolled up inside it. Beads of moisture covered the floor of the tabernacle, or ark, the focal point of the sanctuary.

"I suspect condensation from pipes in the ceiling of our sanctuary was the culprit," Gray-Schaffer said later.

The pipes are "a big problem we have been trying to remedy" in the 58-year-old structure, she said. Recent repairs to the heating system and a severe cold snap may have been contributing factors.

Over the ensuing few days, Gray-Schaffer's shock turned to a deepening grief and sense of helplessness.

"I hadn't realized at first the torah scrolls had been so affected, but they were," Gray-Schaffer said. "I was at the definite low point by Tuesday and felt so overwhelmed that I was tearing up — OK, I was crying."

That's the state in which I found the cantor when I arrived Tuesday for my weekly Hebrew lesson.

I am a Christian, a Methodist, to be exact, but I have a deep love and respect for the foundations of Christianity we know as Judaism. I'm a regular participant in B'nai Abraham's worship services. I believe Christians have a responsibility to look out for our Jewish brothers and sisters.

So I turned to my Christian congregation for help.

I called the Rev. Pat Nelson, associate pastor of the First United Methodist Church, and explained what had happened.

"I think, as much as anything, Cantor Michal could use some sympathy from a fellow local cleric," I said.

Nelson agreed. She immediately called Gray-Schaffer, telling her, "I don't know if there's even a protocol for these occasions, but remember that our God is bigger than all of our problems."

Gray-Schaffer said it was exactly what she needed to hear.

"Her words of comfort will forever live in my heart," Gray-Schaffer said.

Two of the scrolls now are at the United Methodist church. The remaining three are in the synagogue's library. All are being rolled out, section by section, and placed on paper to be exposed to the air so they can dry.

Jews have a word to describe such gestures of kindness: mitzvah. And since it's a mitzvah to accept a mitzvah, the church's offer of help carried special significance to the synagogue, Gray-Schaffer said. It was an offer she couldn't pass up.

Each of the five scrolls is a complete, hand-lettered copy of the Torah — the first five books of the Old Testament.

The lettering is done by specially trained rabbis, called scribes, using all kosher methods and materials. The parchment must come from the skins of kosher animals. The scribe mixes ink, forms his own quills, usually from turkey feathers, and uses a reed instrument to scratch lines in the parchment to make sure his letters are consistent in shape and evenly spaced.

Once all the lettering is completed, the sheets of parchment are sewn together with thread made from the veins of kosher animals and attached to wooden rollers.

"While smelling the damp Torahs for mold, we instead detected the smell of the animals from which the skins came," Gray-Schaffer said, adding these tanned hides are antiques, some more than 100 years old. There was even a small patch of hair on one skin.

A completed Torah scroll is about 150 feet long. There are five of them. That's a lot of scroll to be rolled out and dried.

Through her rabbinic society, Gray-Schaffer contacted a representative from the National Archives, who said the methods being used to dry the scrolls is exactly what needs to be done. Congregation co-president Chris Hood discovered that an East Coast synagogue used identical methods to dry its scrolls following Superstorm Sandy.

Also through the rabbinic society, a New York area scribe has offered to inspect the scrolls as a gift to the congregation, a generous gift considering scribes typically charge thousands and tens of thousands of dollars for their work.

As they dry out and lose most of their surface wrinkles, four of the scrolls appear to be in good shape. The smallest scroll, affectionately called "The Baby," is in the worst shape. Some of its ink bled through the parchment, and the stitching may be coming apart.

Looking back on a harrowing week, Gray-Schaffer said she did a "spiritual 180" through the experience.

"Above all, it was a lesson in the generosity and goodness of the human spirit," she said. "So many people reached out to us who didn't even know us. This experience will always be in my heart."

Tom Harrison, a member of First UMC in Butler, writes editorials for the Butler Eagle.