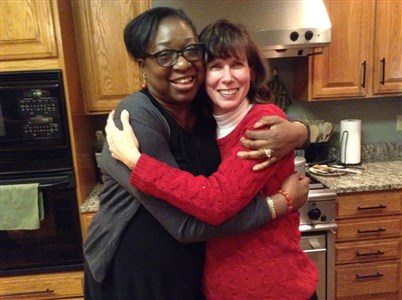 November 8 is Organ and Tissue Donor Sunday in the United Methodist Church. Organ and tissue donation is a life-giving act, since transplantation of organs and tissues is scientifically proven to save the lives of persons with terminal diseases and improve the quality of life for the blind, the deaf, and persons with life-threatening illnesses.  This story was originally posted in April for Donate Life Month.

It’s easy to take for granted the activities that make up an average day, but for Bola Nicholson of Sewickley United Methodist Church something as simple as shopping at the mall was a challenge. Nicholson has been diabetic for 30 years and wears an insulin pump to keep her blood glucose level in the target range. Due to the diabetes, for three years she needed kidney dialysis three times a week. Each dialysis session was four hours in duration and left her exhausted and feeling ill. All of that changed last summer when she received what she calls a most “extravagant gift.”

Nicholson went through the screening process to be placed on the Organ Procurement and Transplantation Network (OPTN) Waiting List for a pancreas and a kidney, but was ruled out as a candidate to receive a pancreas. Though a new kidney would not prolong her life, it would be a significant convenience that would enable her to forego the grueling dialysis treatments.

If you don't have an organ donor card or the box checked on your driver’s license, consider committing a life-giving act.

If you're willing to be a donor, put it in writing. Learn more at organ donor.gov or donatelife.net.

Nicholson’s daughter volunteered to donate one of her healthy kidneys and was set to have the surgery in December 2013, when at the last minute there was a complication and the surgery was cancelled. She once again was faced with the prospect of going back on the waiting list.

Aware of Nicholson’s plight, Pam Honeychurch, the church secretary at Sewickley UMC, decided that she wanted to do something to raise awareness among the congregation about living organ donation.

“I could tell Bola just was not feeling well at all,” said Honeychurch. “Her daughter was going to donate, but then it didn’t happen. Soon after that, I said to Bola ‘We need to get the word out. What does it take to be a donor?’”

Honeychurch began publishing a series of articles in the church’s newsletter explaining the process of donating a kidney. In the course of gathering the information, she realized that she could be a candidate to donate.

“I knew I wasn’t going to publish these articles if I wasn’t willing to walk the walk myself,” said Honeychurch. “I actually called her coordinator before I even published anything in the newsletter.”

The process started with a phone interview that led to a series of blood and urine tests, an examination of family health history, and numerous other tests. In fact, the whole screening process took about six months during which time Honeychurch learned about the financial aspect of organ donation.

“I learned that there is a provision in the Affordable Healthcare Act,” she said. “Anyone on the transplant list is covered. All of my testing, surgery, and hospitalization were covered for me.”

Though Honeychurch expected that her kidney would to go to an anonymous recipient and Nicholson would be moved up on the transplant list, it turned out she was an exact match for Nicholson. She was completely at peace with her decision to donate a kidney and wasn’t nervous about the surgery.

“I just had complete faith that everything was going to be ok. My faith played a big role in it and I would hope that more people would consider being donors to non-family members,” she said. “I’m very thankful that God gave me the strength to feel totally 100% at ease with my decision. I never doubted it and I never second guessed it.”

The transplant surgery was performed on July 15, 2014 and both Nicholson and Honeychurch are feeling great.  The two women have formed a deep friendship that has them talking at least a couple times per week.

“I want to just sing her praise everywhere,” said Nicholson about Honeychurch. “For her to do this, it was God’s will.”

Since the surgery, Nicholson has done the Kidney Walk for the National Kidney Foundation. Her goal for this year is to do the Church World Service CROP Walk from Sewickley to Ambridge. One of the first things she did after the surgery, however, was go to Beaver Valley Mall where she was able to make her way through the stores with ease.


Read what the United Methodist Church says about organ donation.

Get resources for a Mission Moment about organ donation.