Imagine No Malaria Gets Superhero Award

Imagine No Malaria, an initiative of The United Methodist Church to prevent and treat malaria, has received a Superhero Award from the Rotarians Action Group on Malaria. The award was given during the recent annual meeting of the Alliance for Malaria Prevention in Geneva.

Imagine No Malaria, the only faith-based organization represented among the award recipients, was recognized for its grassroots efforts in reaching rural and hard to reach areas with its prevention methods. Dr. Olusimbo Ige, executive director, Global Health for the General Board of Global Ministries was on hand to receive the award, which was signified by the bestowing of a red “superhero” cape. Drake Zimmerman, vice chair of the Rotarians Action Group on Malaria, made the presentation. 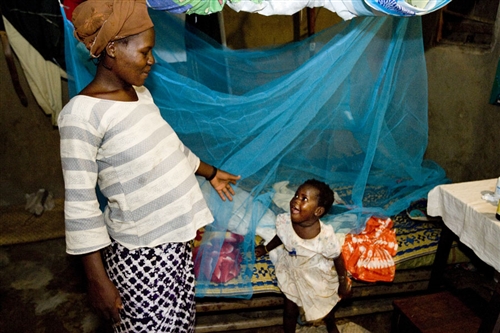 “The award honors the size, breadth and ongoing dedication of The United Methodist Church’s work, in which thousands upon thousands have donated, resulting in thousands of children being alive today, thriving today, in many countries! The contributions of United Methodists from across the globe, especially in the U.S. and Canada, means tens of millions of people now live healthier and more prosperous lives.

“Solve malaria and you solve so many other problems,” Zimmerman said. “Better stated, healthy people can solve their own problems! Malaria control makes prosperity possible now. The subcontinent is booming where it languished for so long, thanks in part to your generous gifts and tireless efforts. We say ‘thank you’ for the outstanding and ongoing work and sustained dedication.”

The Alliance for Malaria Prevention, with more than 40 partners, is a coalition of government, nonprofit, private sector, humanitarian and faith-based agencies working for malaria control.

Imagine No Malaria is committed to ending death and suffering from malaria through prevention, communication, trained health workers and facilities, and grassroots education. To date, INM has raised 86 percent of its goal with more than $65 million in gifts and pledges. United Methodists across the world are working hard to reach and celebrate the initiative’s $75 million goal before the denomination’s General Conference in 2016. Bishop Thomas J. Bickerton of the Pittsburgh Area leads the Imagine No Malaria campaign.
Safe, secure and easy giving opportunities are available on the site so that anyone can participate and join the effort to eliminate this disease. Visitors can make one-time gifts and pledges of any amount, but many individuals participate with a recurring pledge of $28 per month over three years, to potentially save the lives of up to 100 children at risk for contracting the deadly disease.

Additionally, visitors can get a glimpse at the lives Imagine No Malaria is changing through video diaries, touching photos and news stories.