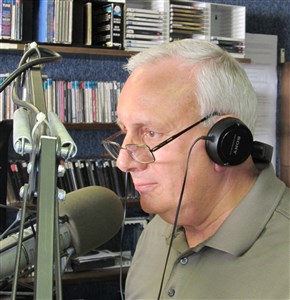 Tune into many radio stations and it’s likely you’ll hear some shocking music, ranting, or  racy content. But one local radio personality is dialing down the shock factor and raising spiritual awareness instead.

More Jesus jock than shock jock, Rev. Rod Smith of Chippewa United Methodist Church can be found in front of a radio microphone every Wednesday afternoon from 2 p.m. to 3 p.m. doing a live talk show on WBVP 1230 AM in Beaver Falls and WMBA 1460 AM in Ambridge and parts of the North Hills. The show is rebroadcast on Saturday mornings from 6 to 7 a.m.

Pastor Rod, as he’s called on air and at the station, started broadcasting his Focus on Faith show about three years ago after the owner of the station suggested that he do a live call-in show. The church was already taping and broadcasting part of its Sunday service on the stations each week.

Smith had some broadcasting experience doing games in college and Sunday morning devotions live on the radio in Kane, but creating his own radio show was a bit daunting. At first he just agreed to think about it.  Then he realized what an opportunity it would be.

“I just thought this was truly an act of God to be on a secular radio station. I think it’s kind of neat,” he said.

To learn the technical aspects of running a radio show, Smith sat with a guy at the station every morning for about a month.  “The first time I did it solo, talk about a sweat,” he said.

Each week Smith prepares an outline for the show, often including music and special guests. One recent show featured a Christian therapist who talked about depression. Other guests have included a children’s ministry director, a man who served as a chaplain in Vietnam, a group of high school seniors from his church, and former college basketball Coach Ron Galbreath.

Listeners are invited to call in and talk to Smith during his show. As a result, he never knows what he’s going to get. The show has a four-second delay that would enable him to drop a call if necessary, but he’s never had to use it. For the most part, callers are friendly.

“Once in a while I’ll get something where someone is just kind of going and I’ll remind them that we’re a positive show,” Smith said.

Smith says that the show has increased exposure for his church and has brought in visitors to services and special events.

“It’s been so neat because there are so many people that listen,” Smith said. “There will be people that will show up in church and say ‘we wanted to come to church.’”

Focus on Faith is supported by private donations. Sponsorships from groups, individuals, and businesses are welcome. Contact Smith at Chippewa UMC at  724-843-4828 for more information.