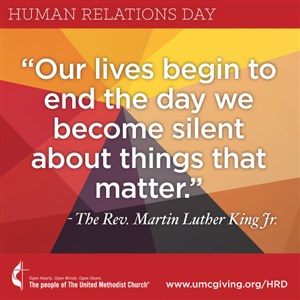 Bishop Thomas J. Bickerton will speak at a Martin Luther King Day observance at 4 p.m., Sunday, Jan. 18. The annual event, sponsored by the Pittsburgh and Greensburg districts, will be at Monroeville UM Church.   Special music will be provided by the choir from Calvary UMC in McKeesport; the Robert Harper Men’s Chorus from Coraopolis UMC; the bell choir of First UMC in West Newton and the Bethany House Drummers. 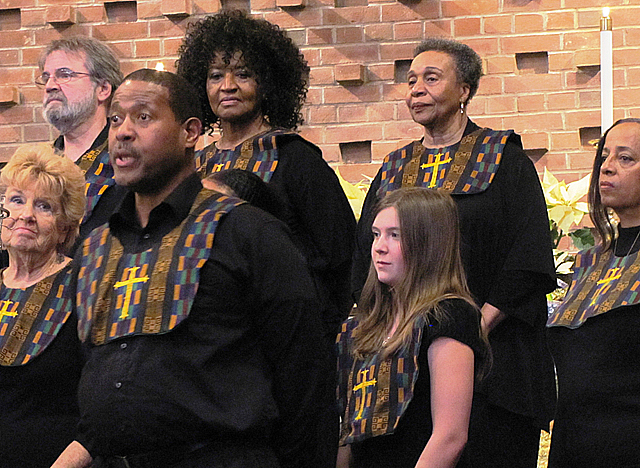 The United Methodist Church celebrates Human Relations Day on the Sunday before the federal observance of Dr. King's birthday on the third Monday in January, which this year is Jan. 19. These two days are woven together in Martin Luther King, Jr.'s desire for and belief in the "beloved community."

The United Methodist Book of Discipline describes Human Relations Day as a call "to recognize the right of all God's children in realizing their potential as human beings in relationship with each other." Special offering on Human Relations Sunday will focus this year on the rehabilitation of youth offenders. Get leader resources for Human Relations Day.

Some congregations honor Dr. King’s legacy of commitment to racial justice, non-violence and ending poverty by devoting time during the weekend to community service and outreach.  One such congregation is Christ United Methodist Church in Bethel Park, where individuals and families will come together at 8:30 a.m., Saturday, Jan. 17 for a Morning of Service. After a continental breakfast and worship service with communion, volunteers as young as age 6 will tackle a variety of projects at the church or elsewhere in the region. The effort was sparked by Dr. King’s statement: "Life's most persistent and urgent question is: 'What are you doing for others?'" RSVP at christumc.net.

Also in the Pittsburgh area, two Let Freedom Sing concerts have been scheduled, with the goal of blurring the geographic demographic and economic lines separating urban and suburban Pittsburgh. Several area choirs will join forces to celebrate the ideals of Dr. King in the concerts, scheduled for 7 p.m., Saturday, Jan. 17 at the Ebenezer Baptist Church in Pittsburgh’s Hill District and at 7 p.m., Monday, Jan. 19 at McKeesport Area High School. Participating choirs include The Heritage Gospel Chorale of Pittsburgh, Franklin Regional High School choirs, McKeesport Area High School Choir, Wilkinsburg High School Choir, the Lemington Chorale, the Steel City Men's Chorale, the University of Pittsburgh Men's Glee Club, and singers from the Greater Pittsburgh Unitarian Universalist churches. There will be no admission charge, but donations will be received to benefit the Greater Pittsburgh Community Food Bank and the Westmoreland County food bank. For details, visit LetFreedomRing.net.


Throughout January, the General Commission on Religion and Race's (GCORR) Vital Conversations Project examines human (race) relations and how our Church can be instrumental in helping to tackle difficult conversations and move forward together. Over the next few weeks, the project will explore themes such as what's really occurring behind civil unrest in communities such as Ferguson, Mo.; how to move past stereotypes; global racism; and the positive contributions that are being made across our denomination.

As the movie Selma opens in theaters, the denomination's General Board of Church and Society (GBCS) encourages churches to organize groups to see it together, then discuss it.

"Selma depicts a pivotal moment in the Civil Rights Movement when courage was key. We can learn much from the faithful pioneers depicted in the film: how they persevered through overwhelming obstacles, how they kept a strong coalition together even through disagreements, how they had a clear vision for what they wanted to achieve, and so much more!," said Bill Mefford, director of civil and human rights for GBCS.

Mefford encourages people to find a time to invite members of their church to see the film together, then find somewhere to discuss the film. He recommends asking:

GBCS has scheduled a national call-in conversation on Monday, Feb. 2, at 4 p.m. EST, for United Methodists to  talk about what their churches are doing to answer these questions. "We will see what connections we can make, what resources we can identify, what magic we can capture when we as God's people come together, inspired by our mothers and fathers in the faith, to follow their example and selflessly give ourselves to our local contexts and dream God's Kingdom dream," Mefford said. Get call details.
News