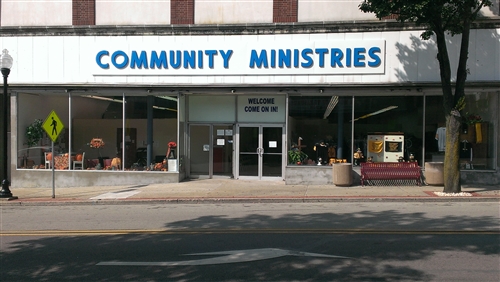 A lot has been happening the past few months at Connellsville Area Community Ministries, which serves those struggling to make ends meet in an area where the poverty rate is the second highest in Pennsylvania.

Chip Rowan, the new executive director, is re-establishing connections in the community where he grew up.  With the help of numerous volunteers, renovations are moving along well in the downtown storefront building that serves as a center for operations. And they’ve launched a Fall campaign called Share the Harvest to raise $100,000 in October and November  to support the ministries.

Rowan, who grew up in the area, joined the ministry early this summer.  “It is the right thing for me,” he said. “God has been grooming me for this my whole life.”

He was on staff at the New Stanton UMC when he saw a newspaper ad for a CACM executive director.  I got the feeling that I was supposed to apply for it, but I threw the newspaper in the recycle bin. Then a gentlemen brought me the ad and suggested I apply.  I still ignored it.  Someone else called me about  it. …..  The fifth time God put it in front of me, finally I was obedient and applied.”  With a background in business, roots in the area and experience in the church, he was hired.

He has received plenty of support from businesses, organizations and volunteers in the area. A look at the ministry’s Facebook page shows volunteers from United Way and area businesses working to renovate the storefront space, and company officials presenting checks to support the outreach.

“I was raised in this community,so people know me through the things I have been involved in,” Rowan explained.  That has helped me and the ministry.  Coordinating this ministry takes a manager, an administrator, and God has given me those gifts.”

Bill Swan, a retired Connellsville business owner and community leader who volunteers at CACM, and the Rev. Bill Mock serve as ambassadors for the Sharing the Harvest fund-raising campaign.  Mock, who is retired and lives in Greensburg,  served 10 years at Otterbein UMC in Connellsville before moving on to become a district superintendent and eventually assistant to the Bishop. Rowan graduated from high school with the Mocks’ daughter Leanna Lake.

Mock said he still feels connected to the Connellsville area and sees a great need there for the ministries offered by CACM.  Fayette County has the dubious distinction of having the second highest poverty rate of all the counties in Pennsylvania.  He volunteered to help raise funds when he saw Rowan at annual conference in June.

Swan told the Connellsville Daily Courier that the theme of Share the Harvest is simple, but something that is necessary in good times and lean times.  “Those of us who have been blessed are called on to share our abundance and help our fellow citizens, right here in our area, who are in need,” he said.

He added that CACM does much to help those who are less fortunate: “I have seen it myself as a volunteer. The ministry and the important programs it offers are essential to the well-being of so many people of all ages that are in need right now.”

CACM moved into its new building in January. Located in the downtown, it has great visibility, and at one time was McCrory’s variety store. Renovations are still underway. It houses the Care and Share boutique, which has expanded hours; a food pantry, a medical equipment lending ministry, a crisis ministry for people in emergency situations; Partners for Life, a mentoring program that helps individuals with finances, building a resume and other life skills; and PUMP (People Under Mission to People), which brings in volunteer teams to help residents with home repairs and maintenance they are unable to do on their own.

Rowan said that although he knows the area and was aware of poverty, the concentration and number of people struggling seems overwhelming.  Some of it is situational poverty and some is generational. “Unless we help them, they won’t be able to get to a better place in life,” he said. CACM is exploring the possibility of starting a Circles program, which mobilizes the community to work with individuals to empower them to break the cycle of poverty.  Rowan is seeking grants and other funding to start.

PNC Bank and the PNC Foundation offered to help with a budgeting program and the first class was held September 26.

CACM operates with three staff members, including Rowan.  Shelley Auer is the part-time assistant director and Sharon Wilson is the supervisor for the Care and Share store.  We could not open our doors without our volunteers,” Rowan said.  “We have about 20 volunteers a day.  There are a total of 40 to 60 people who give differing amounts of time.”

The ministry is ecumenical, he said, and works with community partners.  Food for the pantry, for example, comes from Fayette County Community Action. Local churches and businesses also make donations.  Donations of furniture and other items are shared with the Salvation Army and St. Vincent DePaul.

“Our founding was United Methodist and we are proud of that,” Rowan said, “but we have people from all denominations who come in and help.”

CACM is approaching it’s 40th birthday.  It was started in 1974 because of a church fire.  A few years after  the merger of the Methodist and Evangelical United Brethren churches Central United Methodist Church burned down. Rather than attempt to rebuild, Rowan said, and “the congregation was wise enough to merge with another United Methodist church and use the insurance money to start this ministry. Forty years later, we are still benefiting and it has helped a lot of people.”