Grace Killian, a member of Mt. Lebanon UMC who until mid-March was a mission intern in Israel/Palestine, will serve the next few months at a Syrian refugee camp in Mafraq, Jordan. She will work at the Christian Missionary Alliance Church's Ministry to Syrian Refugees at the Zaatari Refugee Camp, about 15km from the Syrian border. Nearly 107,000 refugees are living at the camp.

Grace was serving with the Wi'am Palestinian Conflict Resolution Center when her tourist visa expired and she had to leave Israel. 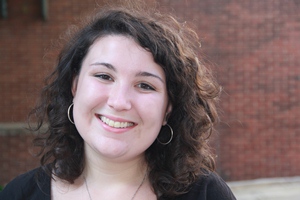 "It is nearly impossible to describe how I was feeling a week ago (when she learned she had to leave.) It is equally impossible to describe how I am feeling right now," she wrote on March 19. "I was quite sad to leave Bethlehem. It had become my home in a way I did not fully realize until I was leaving it." After spending several days at Taize in France, she was to fly to Jordan March 24. Her church has requested prayers for her as she begins the interim assignment.

Grace was one of 29 young adults from around the world commissioned as missionaries in August 2013 in New York City. The commissioning came after three weeks of training, living in intentional community and exploring the challenges and opportunities in the mission field. The 14 other mission interns who Grace lived, did chores and cooked with included young adults from Africa, Bolivia and several areas of the U.S.

“We got a cross-cultural perspective and it was interesting and challenging. The Church really is sending missionaries from everywhere to everywhere,” she said.

“A lot of information was packed into the three weeks, Grace added. They explored “how we as United Methodist put faith into action, focusing on social justice, racial justice and ministry with the poor.”

After commissioning, Grace and the other mission interns began 20 months in their assigned locations, learning and working in communities that struggle with injustice and suffering. “We will be living simply and working alongside the people where we are serving. That is something unique about our mission work,” Grace explained. She arrived in Bethlehem on Sept. 20, 2013.

The Wi’am Palestine Conflict Resolution Center was established in 1995 to help resolve disputes with the Palestinian community in the Bethlehem area through the traditional Arab form of mediation known as Sulha, as well as Western models of conflict resolution. “Wi’am” in Arabic means “cordial relationships.” Grace will engage in English-language interpretation of the center’s work and the situation in the Palestinian communities.

It seems to be a position for which God has been preparing her for many years.

Grace has been on an ecumenical/interfaith path for much of her life. The daughter of a clergy couple, she attended Hillcrest Christian Academy in Bethel Park for grade school, then went to a Roman Catholic high school, Seton La Salle in Pittsburgh.  From there, she chose to enroll at Brandeis University outside Boston. It is the only nonsectarian Jewish-sponsored college or university in the country. She graduated in May 2013 with a bachelor’s degree in international studies and music.

At Brandeis, unlike many other schools, there is a heightened awareness of the Israeli-Palestinian conflict. Much of the information, discussion and action comes from an Israeli perspective. Before leaving for her assignment, Grace said she was looking forward to getting to know and understand people of different faiths. “God calls us to tear down those walls,” she said.

Grace’s faith journey began in her home and was nurtured in the Mt. Lebanon church. There she was strongly influenced by participating in Dames in Action, a United Methodist Women’s circle for teenagers.

“I was 12 years old and in seventh grade when it got started,” she said. By her senior year in high school she was president of the group.

“The United Methodist Women provided some incredible role models in the way they care for women and children,” said Grace. Besides sparking an early interest in mission, Grace gained leadership and fund-raising experience and was able to see how focusing on a common goal can create unity in a church. The Dames in Action organized efforts to support Nothing But Nets, the pre-cursor to the Imagine No Malaria campaign.  The effort and brought in about $1200 for NBN.

Grace attended the Summer Youth Institute of Pittsburgh Theological Seminary for high school seniors exploring Christian vocation. She worked with participants as a resident alumna in 2010 and in the summer of 2013.

Another formative experience in her faith journey came on a Northeastern Jurisdiction Mission of Peace to Cuba. She saw that “love extends beyond lines and limits. Christian life is really about tearing down walls and going to and caring for those in the margins.”

During college, Grace spent a study semester in Senegal working with grassroots organizations and served a two-month Global Ministries summer internship on the Navajo Reservation.

“That was really an eye-opening summer,” she said. The history of the Native American people is tragic, but I learned a lot about hope. The people there have a lot of hope.

“It also helped to dispel the myth that missionaries are required to go in and fix everything.  We are called to go in and walk alongside them.  The United Methodist Church is definitely on the right track in Ministry with…” she said. “It’s really exciting to be a part of it. It’s what makes mission work more than community service.”

Mission interns must raise $2500 a year in support and they receive living stipends based on their location. Support Grace by donating online through umcmission.org to Grace Killian, Advance # 3021841 or sending a check to the Conference Treasurer with the same designation.