Volunteers are needed in several areas of Western PA to help with clean-up of homes flooded by storms in late June and July.

The DuBois-Reynoldsville area was hit with torrential rains of up to 6 inches of water in 24 hours on June 27. Hundreds of homes and businesses were damaged in the storm. On July 10, a tornado hit the New Castle area,which also saw flooding from heavy rains. Areas south of Pittsburgh saw severe flooding that same day, and subsequent isolated storms created problems caused problems the following week.

District Disaster Response Coordinator Rev. Tom Carr and Rev. Lance Tucker and the staff at First UMC in DuBois have worked continually to address situations within the Clearfield and Jefferson County communities.  Every day a few more requests come in from people asking for help for clean-out. Volunteer teams have been going in on a daily basis and the needs are being addressed one case at a time as help is available. Three weeks after the flooding, there were 100 homes or more where assistance was needed. Carr described the situation there in a July 9 e-mail plea for volunteers, especially those who have received Early Response Training.

"... we have approximately 80 homes yet to reach where we have been requested," he said.  "That number continues to climb as we are now seeing a second wave of requests come in from those who did their own clean up, but did not do adequate work for mold remediation. With more than 2500 (approaching 3000) homes in the area affected by the flood, Lance Tucker and I are feeling swamped and somewhat frustrated because we see so much need and have so few volunteers compared to the need....There are many still waiting for us to be able to send in a team with a trained leader to begin the process of mucking out ... and in many cases, removing wall coverings to expose the studs for drying and mold remediation. Add in the hot and humid weather we've had these two weeks and the mold is growing almost faster than one can imagine. There are many persons with illnesses still living in these homes and waiting for our assistance."

Cook said in his July 24 report that Tucker and Carr felt that they were gaining ground, but much work remained to be done. Volunteer teams were encouraged to come to the area.

First UMC, 100 W. Long Ave., Du Bois, Pa. 15801 is serving as the deployment center and was distributing cleaning buckets and supplies. Volunteers should call the church office at 814-371-5150 to register themselves or their teams.

Rev. Nelson Thayer, director of the Mission Barn, and the Rev. Brad Neel, Butler District Disaster Response Coordinator, were coordinating efforts in the New Castle area. At a trailer park in the New Castle area 10 families were displaced and will be unable to return to their homes, according to the Red Cross. Thayer was deploying volunteers through the Mission Barn as well as overseeing distribution of cleaning buckets and other supplies at the Mission Barn, which serves as an UMCOR depot. As of July 27, the Mission Barn had received 34 requests for help and were able to help 16. If you can help with flood relief,contact Thayer at 724-462-4090 to schedule a time to come.

Central Highlands UMC is serving as one of three locations from which volunteers will be deployed as part of a joint effort with the regional VOAD (Volunteer Organizations Active in Disasters) and Christian Associates of Southwestern PA. South Hills Interfaith Ministries (SHIM) and Resurrection Lutheran Church in Oakdale were also serving as deployment centers. Those who need assistance were asked to call 2-1-1, a regional community 24-hour hotline. Volunteer teams or individual volunteers who want to help with clean-up in the Elizabeth AReashould contact Central Highlands UMC,100 Timothy Drive, Elizabeth Twp. at 412-751-0511; SHIM, 5301Park Ave., Bethel Park  at 412-854-9120 is handling the South Hills and Resurrection Lutheran Church at 7600 Steubenville Pike, Oakdale (412-788-4513) is coordinating for Bridgeville.  As part of the UM effort, both Fred Watts, the Pittsburgh District Disaster Response Coordinator, and Sue Sphar Calhoun, who serves in that position in the Washington District, were helping to assess needs and assign volunteers.

Shortly after the July 10 flooding, 200 cleaning/flood buckets were moved from the Mission Barn to the Pittsburgh Salvation Army. Volunteers from Crossroads UMC had cleaned out 20 homes as of July 24, Cook reported.

Among the teams helping in DuBois soon after the flooding was 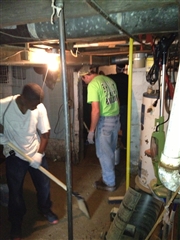 a group of 12 Western PA staff members, two of their family members and two district superintendents, led by Volunteers in Mission Coordinator Diane Miller. The team removed wet drywall, insulation, carpeting and appliances from a cottage-style home where water had reached a depth of about four feet. The property owner, whose 87-year-old mother lived in the home, does regular mission work in Jamaica and has been a part of disaster recovery teams himself, never expecting that his family would be on the receiving end of similar help.

Teams from several churches have worked in the area since the flooding. The week of July 8, teams of youth attending WPAUMC's Mission u at Grove City College traveled to the area to muck out basements and help in other ways. Rev. Rick Nelson, dean for Youth Mission u and co-coordinator of the Conference Disaster Response Team was supervising the work. (See Photo Gallery)

The Mission Barn had delivered a total of 860 cleaning buckets to DuBois First by July 3 and their tool trailer was parked at the church to equip volunteer teams heading to work sites.

To assist in the response and recovery if you are unable to volunteer, consider making a monetary donation to the WPAUMC Disaster Response Fund or donating materials for cleaning buckets to the Mission Barn.

Filled cleaning buckets or materials for them may be dropped off at the Mission Barn any time (205 Church Lane, New Castle PA) or at the United Methodist Conference Center between 8:30 and 4:30 Monday through Thursday (1204 Freedom Road, Cranberry Township PA).

Monetary donations can be made for WPA Disaster Response by sending a check to the UM  (, Cranberry Township PA 16066-0002) made out to WPAUMC with “Conference Disaster Relief Fund” marked in the memo line.