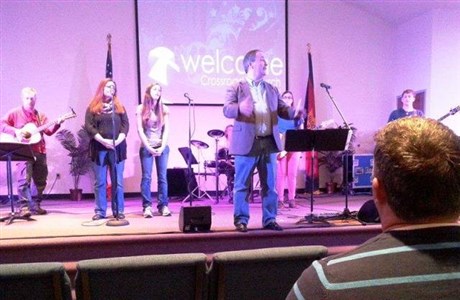 Crossroads UMC officially launched a new campus on Oct. 25, something not all that unusual for the small-group-based congregation that developed a multi-site strategy about nine years ago. But this time the campus is in a different state and a different annual conference.  It’s in the city of Weirton, West Virginia—about 25 miles due west of Crossroads’ North Fayette campus near Greater Pittsburgh Airport.

The groundwork for the launch was done over several months by Barry Taylor, the new campus pastor, and a core group of about 60 people who live near the former steel town, but attended worship services at the North Fayette location. The launch day began with a Harvest Festival for area residents and culminated in a 5:30 p.m. worship service at the Salvation Army building in Weirton.

“We had 138 in attendance and only about 20 individuals were there from our other campuses or from other area United Methodist churches to support the launch,” Taylor said. “So we feel very positive about the number of unchurched Weirton-area people we reached. “ Thirteen were children in the KidZone ministry, held at the same time as the worship service, and some middle school/high school students were among the congregation, he added.

“Seven  people signed up to attend our Pizza with a Pastor ( a one-hour informal orientation to Crossroads) event next Saturday after worship, “ Taylor said, “and, most importantly, three individuals indicated on Communicator Cards placed in the offering baskets following the message that they were making professions of faith!”

Rev. Steve Cordle, founding pastor of Crossroads, said that several of the growing number of people from the Weirton area who were worshipping at the North Fayette campus told him it was hard for them to invite their unchurched friends because they didn’t want to drive a half-hour or more to get to church.

“Following our campusing plan, we formed a launch team of people from the Weirton area who were interested and thought we’d see what God would do,” he said.  “We already had four small groups meeting in that area and a fifh one that was going to start. That’s a good basis for launching a campus there.”

One of those regularly worshipping at the North Fayette campus on Saturday nights was Taylor, a seminary graduate who had served in pastoral ministry, but stepped away in his mid-30s to work for the state of West Virginia in human services. He  moved to West Virginia’s northern panhandle and he and his family found Crossroads on the Internet when they were looking for a United Methodist church to attend. They were more than willing to make the one-hour drive to get there.

“It was just what we were looking for.  I learned so much about being effective in reaching people in the 21st Century,” he said.  “Earlier this year, Pastor Steve found out that I was doing work in Weirton with health and human services.  He told me about the idea for a campus in Weirton and I began praying about it.  Last April, Taylor joined the Crossroads staff part-time as the first Weirton campus pastor.

He worked through the summer networking with Crossroads staff and folks who live in the Weirton, Steubenville (Ohio) and Burgettstown, PA area.  He was part of Crossroads leadership training school and spent time in the Weirton area connecting with schools, government officials, and social agencies, doing demographic research and looking for a place to launch.

While formulating the goal to launch a fifth campus in the Weirton area, Cordle talked with his district superintendent, Brad Lauster, and Bishop Thomas J. Bickerton. Bishop Bickerton, a former West Virginia district superintendent himself, contacted West Virginia Bishop Sandra Steiner Ball. All seemed to agree that the important thing is making disciples – not state or conference lines.

As Bishop Bickerton put it:

“Geographical   boundaries should never stand in the way in our ongoing efforts to make disciples of Jesus Christ for the transformation of the world.  I am not only grateful for the vision of Crossroads United Methodist Church, but for the collaboration of Bishop Sandra Steiner Ball and District Superintendent Martha Ognibene of the West Virginia Annual Conference in helping to make this new initiative possible.

“People are traveling from the northern panhandle of West Virginia and portions of East Ohio to seek out the meaningful ministry of Crossroads Church.  I applaud their efforts to go where the people are rather than simply expecting them to come to us,” he added.

“This is a great example of what can happen when we listen to the Spirit, communicate with a spirit of transparency, and respond with courageous leadership.  I invite all of us to pray not only for this new campus of Crossroads Church but for the vision needed throughout our conference to extend our witness to God’s children wherever they may live.”

The role of campus pastor, said Taylor, involves a lot of administration, networking and operational details—and just getting out into the community.   We make sure that the worship is excellent, small groups are operational, that we are networking and following up and that the campus stays healthy.
Cordle writes the weekly message around a theme and campus pastors use it as the basis for their teaching, often using their personal examples. The Kids’ Zone and youth ministry curriculum is coordinated with the theme and also created by Crossroads’ staff
.
All campuses share Crossroads’ mission, vision and core values.  Taylor said they emphasize radical hospitality and inclusive welcoming so that people feel at home from the parking lot on.  The church is based on small group ministry, which Taylor said is relatively new in the region.

“We want people to try a small group right off the bat,” he added. We obviously have to start out offering our basic classes, which is the best way for people to begin the process of getting involved. WE have six small groups now and we are starting a seventh one before Christmas.”

“Our third emphasis is service to the community. We want to do servant evangelism. We want to be with folks that are struggling – not just short-term, but in long-term ways,” he said.

When Weirton Steel closed, many residents of the area found themselves living in poverty and the community has been reinventing itself.   “Our core group has been trying to do outreach ministries to the Weirton area in partnership with others. In August we prepared back to school bags for disadvantage students … we also did bags for teachers,” Taylor said.  Although there is a brand new consolidated elementary school in the community, he explained, there is debt for the building. The poverty rate in the school is about 60 percent and the teachers needed help to supply their classroom supplies.

While preparing for the launch, Taylor also met with DS Martha Ognibene of West Virginia’s Northern District and with other area United Methodist Church leaders.  All have been supportive, he said, and seem to welcome a ministry focusing on reaching the unchurched, estimated to be about 54 percent of the population in the Weirton/Steubenville area. That’s equates to  67,000 people living within a 10-mile radius of Three Springs Drive, a key commercial corridor in Weirton that’s just a mile from the Pennsylvania border.

For new people, Ognibene noted, “It can be difficult to break into an established group...and when that group is a church (and you may not know much about "church"), it becomes especially intimidating!” she said. “That's why the Crossroads UMC Weirton Campus is so helpful to the unchurched in the Weirton/Steubenville area."

Steve Cordle and Barry Taylor laid a good foundation with the Northern District of the West Virginia Annual Conference before beginning worship services, she added.  “The pre-existing churches in the Weirton area and Crossroads UMC are benefiting from collaboration, and the good news of Jesus Christ is reaching new persons as a result.”