Enlow to Retire from Jumonville 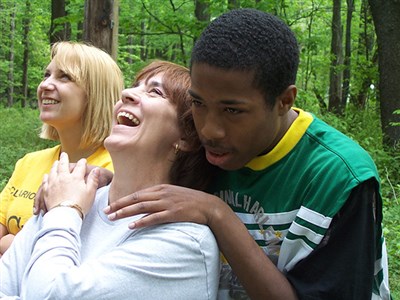 Being in charge of all of the programming at Jumonville requires energy, patience, motivation, and a strong desire to serve the Lord. Ree Enlow has all of that in spades.

For over twenty-five years, Enlow has been planning, directing, counseling, and coordinating everything from programming, to risk management, to staff training at the camp. Though her official title is Director of Program Services, she also serves as the camp nurse, camp store manager, and Challenge Course manager. As if all of that isn’t enough, she’s also in charge of weekend staff and runs the annual HOPE Camp Program (Helping Overcome Problems Everyday).

In August, 2015, Enlow will hang up the many hats she’s worn at the camp over the years and begin a new chapter in her life that has her getting married and moving out of state.

Before she leaves, however, Enlow has a lot of goodbyes to deliver, perhaps most notably to some of the HOPE camp participants who affectionately refer to her as Mama Ree.

“They told me that I was like mom and asked if they could call me that. I’m the old woman who lived in a shoe,” Enlow said referring to the nursery rhyme about a woman with a very large family.

Originally started as a three day camp for children with parents in the prison system, HOPE camp now serves a larger audience of at-risk children and runs for six and a half weeks throughout the summer with participants attending for one week at a time based on age. Enlow was one of the founders of the camp that offers kids an opportunity to grow spiritually, socially, and personally.

The title of Mama Ree may be honorary, but in many ways, Enlow she has served as a surrogate mother to the camp’s participants.

“In some kids’ lives, when they come to camp, they look for something to be stable, and I’m the only stable face that they know,” said Enlow.

The impact Enlow has had on the lives of these young people is significant.

“There are so many kids who have said to me that they appreciated the fact that I yelled at them because it showed them that someone cared,” Enlow said. “I believe in taking advantage of being ‘not the mom,’” she continued. “Sometimes, if you’re the mom, they block out what you’re saying. But I can say things to them like a parent and they hear it,” she said.

The campers aren’t the only ones who will miss Enlow when she leaves Jumonville. Larry Beatty, the camp’s president, is already feeling the weight of the responsibility of finding someone to replace her.

“Whoever comes next will have some big shoes to fill,” said Beatty. “Ree coordinates the summer camping program, trains counselors and camping staff, leads worship services, deals with healthcare issues,” he said. “When you work at Jumonville, you don’t really work here. It’s a lifestyle and a calling. It’s a ministry position.”

In her twenty-five years at Jumonville, Enlow has compiled an impressive list of accomplishments.

“Her biggest legacy will be the Hope Camp Program and the passion she has for that program,” said Beatty. “Being able to see so many kids come in and have it transform their lives.”

It’s not just the campers whose lives have been impacted by Enlow, but also the camp staff.

“Many of the summer staff still keeps in touch with her,” Beatty said. “She’s become a lifelong friend and mentor.”

Enlow admits to being uncomfortable talking about herself, and takes no personal credit for what she’s accomplished.

“For twenty-five years I’ve done what I do to build a kingdom and not get attention,” she said. “The important part of my job is summer camps and to be able to spend time in training with college kids and be in ministry with them through the summer,” she said. “Every week we do an altar call on Wednesday, and we’ve had a phenomenal number of kids make a first time commitment to God. God is at work here.”

When asked how she wants to be remembered at the camp, Enlow said she hopes her legacy is that she did all things to the glory and honor of God.

“Things may change when I’m not here, but the bottom line is, ‘Was God glorified in everything I did?’ That is more important to me than I can ever begin to tell you.”

Jumonville is seeking to fill Enlows's position with a new staffer this spring. For more information, visit Jumonville's site.