Ministry Goes to the Dogs at First UMC, Johnstown 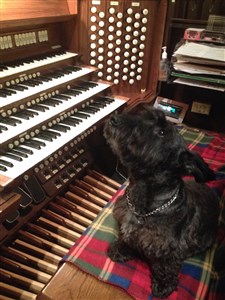 The music ministry at First UMC in Johnstown has gone to the dogs. Though the female responsible isn’t saying a word, everyone else is quick to sing her praises.

Emmy, a 9-year-old Scottish terrier, has been part of the church choir for several years.

It all started one Easter morning when Tom Ferguson, the church organist and bell choir director, had to be at church very early for a sunrise service.       Realizing that he would be away from home until later that afternoon, he decided to bring his dog Emmy with him to the church. Initially, he put her in the bell choir rehearsal room, but when one of the choir members saw her there, she insisted that Emmy come sit with her.

Emmy has been attending services ever since that day. She’s even been baptized at the church.

“I’m half tempted to get up in church on Sunday morning and say that Emmy’s attendance has been better than some of the members,” joked Pastor Ed Herald.

Though her usual spot is next to the organ, Emmy can also be found sitting in a pew.

“The kids come to visit her before church and sometimes members will ask to have her sit with them.” Ferguson said. “She has no particular affection for one member over another. She just loves everybody.”

Emmy may not play favorites with the members of the congregation, but that impartiality does not apply to her preference in music. When asked if Emmy has a favorite hymn, Ferguson replied, “Oh, yes, she does--Just as I Am, Without One Flea.”

In the years that Emmy has been coming to services, the church has not received a single complaint about her. She’s never barked in church and, according to Ferguson, she’s so quiet and well behaved that some people don’t even realize she’s there.

Dogs have long been used for therapy and to offer comfort, but Emmy is the first to offer canine ministry at First UMC Johnstown.

“We’re tempted to try to use her in the children’s service sometime,” said Pastor Herald. “She has a welcoming ministry.”

As part of a breed with an expected life span of 12 to 15 years, Emmy likely will be busy greeting members and assisting with the choir for a long time to come.