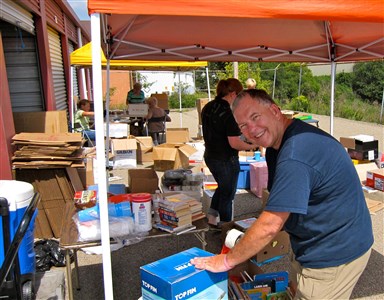 Eleven members of The Nyadire Connection (TNC) spent a recent Saturday sorting and boxing about 30,000 children’s books that will be sent to libraries in Zimbabwe.

The books were donated or gathered by Western PA United Methodists this summer from their homes, public libraries, school libraries, a bookstore and Brother's Brother Foundation. Joan Bowser of Faith UMC in Delmont coordinated the TNC collection.

In addition, to the opportunity to provide books, the collection triggered a $10 per box contribution to Imagine No Malaria for each of the 375 boxes packed. Twenty-five of the boxes will go to the Nyadire Mission.

This month a TNC volunteer will drive the books to First UMC in Ypsilanti, Michigan, where members Morris and Ann Taber are organizing an ocean container shipment for September.

The Tabers have started and supported primary school libraries in Zimbabwe since they first went to Mutare to serve as individual Volunteers in Mission in January, 1999. Morris Taber, a retired college history teacher, went to teach at Africa University, while Ann, a retired school librarian and reading teacher, offered her professional services to the Hartzell Primary School at the Mutare UM Mission. But the headmaster told Ann that the school, like the other mission schools at the time, did not have a library because of a lack of appropriate books.

The Tabers, bought some books, solicited donations from friends, and five months later, the 900 students at Hartzell Primary School dedicated a library of 8,000 books. Over the years, the couple has traveled to Zimbabwe about 15 times and collected and sent books for seven additional libraries.  They also provide support for students.

Earlier this year, they launched a campaign to collect 500 boxes of books to replace some that have worn out and to expand the collections at the schools. The “matching grant” of $10 per box for Imagine No Malaria was an added incentive.

“Books are like Gold in Zimbabwe,” the Tabers said. “They are expensive and scarce and they are highly valued and desired. English is the language of instruction in the schools, but the children, surrounded by Shona ... must learn it with little to read except their few paper textbooks."

"In 7th grade, children take a battery of tests, all in English, which decides their future, they explained. “We have found that test scores are higher in schools that have libraries.”

TNC, which partners with the UM Mission at Nyadire on a variety of programs including a library, teamed up with the Tabers in this effort, which exceeded all expectations. In fact, Morris Taber wrote to TNC’s Drew Harvey that he has just asked Austern Chipiri of the Zimabwe Episcopal Area to send him the names of two more schools to receive books.

“TNC is sending enough books to start three new primary school libraries where children will get a fighting chance …” Taber wrote. “God is good! And so are his People.”

Learn more about the Taber's ministry.