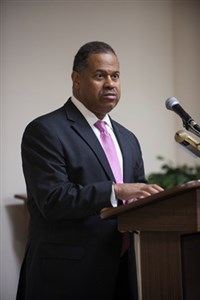 About 25 lawmakers from several denominations and religious leaders  attended a Lawmakers' Prayer Breakfast hosted by United Methodist Advocacy in Pennsylvania at Grace UMC in Harrisburg recently.

Rev. William B. Meekins Jr,(shown above) assistant to Bishop Thomas J. Bickerton, delivered the keynote message, and leaders from the other UM annual conferences participated in the liturgy at the Sept. 30 event.

One United Methodist lawmaker, Rep. Jesse Topper of District 78 in the Susquehanna Conference, on the spur of the moment took on the role of piano accompanist during hymn singing. He majored in musical performance as an undergraduate.

Dai Morgan, coordinator of UM Advocacy said the intent was to provide a non-political setting where lawmakers could gather in shared faith to pray for one another, the state government, and wisdom for the difficult decisions facing the Senate and House this fall session.

Morgan said it has been a long time since there was an organized prayer breakfast for state lawmakers. "I think this prayer breakfast was needed and appreciated by those in attendance. I'd like to see it happen again. This could be the start of a regular program of similar events sponsored by the United Methodist Church," he said.